Tea for Two Would Be Nice 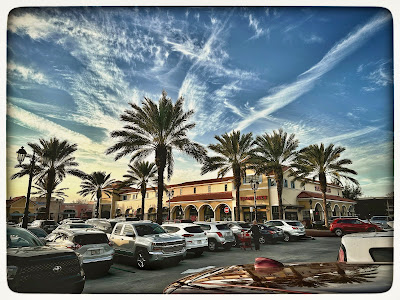 Here's some advice--if you are ever going to steal anything, make certain it is marked "Top Secret."  If you get caught, just shrug.  "I don't know how those got here.  Maybe somebody put them there by mistake."  That seems to do it.  But don't get caught stealing a pair of bloomers from Walmart.  History would have it that the same excuse won't work there.  You'll most likely end up in court.

That photo at the top of the page is a snap I took with my iPhone last night on a trip to the grocers.  I took it and cooked it up in under sixty seconds.  I'm pretty much done with digital cameras for anything but the most "important" shoots.  These shoe phones knock me out.

The trip to Trader Joe's came about because I didn't want to cook. TJs is for the laziest of us.  Oh, it is cheaper than other stores, too, but for real savings you want to go to Aldis.  Not me, of course.  I don't shop for the savings.  I shop to get what I want, and TJs had it last night.  I didn't want to cook.  The cleaning crew had come that afternoon, and per usual, I wanted the kitchen to stay clean for at least an entire day.  So TJs and its gigantic choice of pre-made "ethnic" dishes, none of which meet my usual dietary standards.  What I wanted was a good bowl of Asian noodle soup, pho, ramen, or the like.  I was prepared to make it, but again, I didn't want to mess up the kitchen, and for some reason, driving to a place I could get noodle soup takeout seemed too complicated.  So. . . I bought a frozen pho with beef and two chicken tamales.  I know. . . I was confused.  There were simply too many choices, all of them high in fat.  TJs loves fat, apparently.  It is not a health food store.

So I bought three different kinds of candy.  They have good candies.

I can't quit thinking about the secret files thing, though.  How in the hell do they get to avoid a firing squad?  All of them.  "Oopsey" is not a defense.  God knows who else has them.  Apparently the National Archives or whoever is in charge of these things (yea, I'm a real political scientist, I am) is like a colander with a big hole in it.  I'm bewildered.  Who cares what ideological or political beliefs they hold?  There are bigger penalties for being late on your auto tag renewal.

As you know, I like to read reports on the latest scientific findings, but I've decided I need to stop.  I don't think I am enamored of science any longer.  It is good stuff, but it has become too much a business.  People need to publish to get ahead in the field, especially academics.  As a result, if I may opine from an unworthy place, there is too much "junk" science.  The rate of "discoveries" has accelerated.  Too much sleep will kill you.  Too little will give you dementia.  But. . . maybe. . . the quality of sleep is more important.  We just need to figure out how to measure that.  Many, more women than men, more people over 65 than under, more poor than rich, rely on "sleeping pills" nightly.  But they are bad for you. Not sleeping is bad, but pills are bad.  "Ask your doctor," they say.

I'm not asking my doctor.  She's a moron.

"No amount of alcohol" is good for you.  O.K.  Why not label ibuprofen, too.  And acetaminophen?  And everything else on the "over the counter" medicine aisle?

"Use only as needed."

Fuck it.  They have scared me to death.  Nearly.  I fear for my health and life daily.  I can't possibly consume all the things I need to to live forever.  I need both aerobic and strength training every day, but I can't forget about meditation and yoga, either.  It is really important that I don't sit for long, they say.

My mother, 91, and all of her similarly aged friends, have eaten bologna, processed cheese, bleached flour bread, and lard along with their smoking and drinking.  They all love them a Vienna sausage from time to time, too.

I'll quit reading "the science."  It has damaged my psyche.

I was a little productive yesterday.  I went through two weeks' worth of untouched mail.  I emptied and re-organized two big drawers in an effort to find the rechargeable batteries I bought so long ago but could not find.  I found them.  I found a lot of things.  Drawers are mysteries to be explored.  One of the things I found was a sage smudge that Ili left.  Now that I am anti-science, I may light the fucker and burn away all the bad spirits or whatever they are supposed to do.  I'm going to get my friend, a bruja in training, to cook me up some mystical potions and elixirs.  I'll pull out the crystals, too, that were left behind.  I'm certain that it will bring me more peace than science currently is.

I'm skirting a lot of personal revelations here, I know.  My life is full of worry and drama that I don't want to write about here.  It was either the best or the worst time to quit drinking.  This morning, however, I woke myself up laughing.  Big belly laughs.  I was remembering a night with my climbing buddies down in Old Mexico. Four of us shared a room.  I slept in a bed with one of my friends.  In the morning when I woke up, I was wrapped around him from behind as I would be around a lover--in flagrante delicto!  Holy shit, holy fuck.  He woke up as well just at that moment.  I wanted to kiss him and tell him I loved him, but it didn't seem appropriate in the moment.

And that is how I awoke.  Laughing, I mean.  Maybe tumescent, too.  I only remember the belly laugh.  As I lay there, I tried to remember the last time I had laughed like that.  A belly laugh.  When was the last time I laughed so hard I couldn't catch my breath?  It has been years, I think.  That is a sad reflection.  Tragic, really, because I used to laugh so much.  But it is hard to laugh alone. . . unless you are recalling screwing your buddy in your sleep!

I need to laugh.  I need to laugh until I can't breathe.  It will take something stupid. . . like singing a tune by Big and Little Edie.  I used to laugh about the dumbest things.

Life was better when it was stupid.