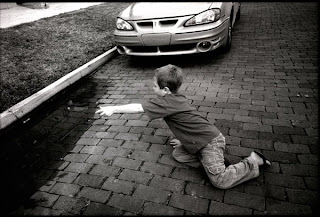 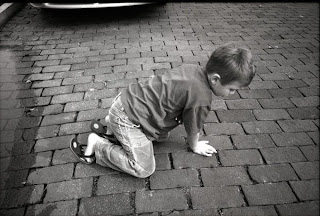 Skip ahead. I am nine, ten years old. We have moved to a new state and into a house with INDOOR PLUMBING. It is the early sixties and the new thing is the Shopping Center. They were springing up all over the country, and we had one. The Cuban Missile Crisis has turned its parking lot into a combination Carnival/Bomb Shelter Expo. Going in and out of bomb shelters had me pretty freaked out. They sat there above ground like big silos with big chimneys one would crawl down to get to the big pod sunk deep in the ground. There were giant air filters that had to be hand cranked to bring air into the pod from above ground, filtered, of course. The thought of being stuck in one of those things, living underground with cans of food and no place to play, wore me down.

Across the parking lot, there were a few rides, a Ferris Wheel, some Crazy Cars. And finally, when my parents were done looking at the big, shiny doom and gloom, they said OK to my constant complaint, "I want to ride, I want to ride the Crazy Cars." My mother handed me some money and away I ran at top speed covering the distance like somebody on fire until I got close enough to see the midget selling tickets. My father said I looked like a cartoon character as it approaches a cliff, legs running in reverse, body leaning backwards, slowing with that screeching sound as forward motion continues. The midget asked me if I wanted to buy a ticket. "No thanks," I said. I'd been scarred.

Skip ahead. Twelve, thirteen years old. I'm staying with my aunt and uncle who are manning an Amway exhibit at a smallish county fair. The evening winds down, and just before the fair closes, they let me go explore the midway, a small oval up and back. I wander against the crowd as they make their way to the exits, moving into the darkness and quiet of the far turn, puddles of light and shadow, the blinking of colored lamps. I stop and look at jars filled with human oddities, babies with fins and gills and tails, bleached, puckered homunculi floating in a galaxy of formaldehyde, bent, constrained. Near the end where the midway began to turn, a bored man stood before a sign advertising "The World's Smallest Man." I lingered a moment as he stared away toward the retreating crowds. Twenty-five cents. I approached him timidly with the coin. He took it silently and waved me in. I entered the tent slowly on a sawdust floor. There was a box with cutaway sides on a table. Inside, there was a giant reel-to-reel tape recorder, a microphone on a table stand, and looking off over the opposite side, a tiny man with a giant head. He had not heard me enter and I did not know what to do. I stood for a while, confused, looking at him looking out at the crowd. The hair on the back of my neck stood up as I thought about the TV show, "The Wild, Wild West," remembering the dwarf's companion, the Giant as I stood there in the dim tent alone. But the smallest man in the world must have felt me there, felt something, for suddenly he whipped around to face me, giving out a tiny shout of surprise, me echoing him exactly a millisecond behind like reverb. And there we stood, looking at each other painfully, my twelve-year old brain not prepared for the etiquette required. Then he waddled over to the tape recorder that seemed to be as big as he, and with both hands, he turned the switch with a dull clunk, and the reels began to rotate. With his tiny hand, he pushed up his horn rimmed glasses that made his eyes enormous, and then spoke to me in a small, miserable voice: "Is there anything you would like to ask me?" I was paralyzed. I shook my head back and forth with too much emphasis, then turned toward the exit, legs stiff, spine rigid.

But weirder times were coming. On my birthday in 1964, the Beatles appeared live on The Ed Sullivan Show. But that's enough for now.
Posted by cafe selavy at 9:40 AM