When the Going Gets Weird 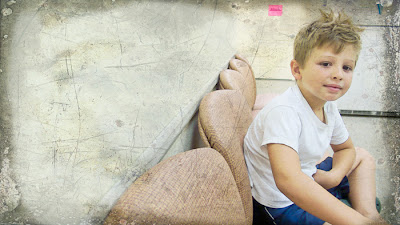 As kids growing up in what was then a sleepy southern hamlet of a town, we all looked forward with great anticipation to the county fair that came for two weeks each March. The first kids to go would come to school with fast tales of weird fun, of freak shows and wild rides and food you couldn't get at home or anywhere else that we knew for that matter. I was never in this first wave of fair goers, but eventually my parents would take me, usually on a Friday or Saturday night. Night, it seemed to me, was the only time to go. There in the dark, the flashing colored lights and strange high-amp sounds set you off kilter, twirling you into some nether world of the senses.

The rides were one thing that you had to endure. They were cruel, a terrifying conglomeration of giant bolts and tracks and gears and chains and hard, cold metal. Every kid knew a plethora of apocryphal tales of beheadings and amputations, of cars flying off the tracks or Ferris Wheels gone wrong. Greasy men who lived in tiny Streamline Trailers and were wanted by the law would load you into rides like The Bullet where your head would be driven between your shoulder blades and your stomach would force its way into your throat as you were hurled at pre-Disney speeds around and around and around.

But as I said, these were things to be endured. Maybe they were fun, but I appreciate them now only for the sense of criminal danger they added to the night. Better were the Games of Chance where you could win cheap trinkets or, if you spent enough of your money, a large stuffed animal that you would then be cursed to carry with you for the remainder of the night. Throw the nickel on the Lucky Strike, the wooden hoop over the Coca-Cola bottle, the basketball through the smaller-than-normal hoop, or win the race by driving your horse around the track using a water gun. And more. But your money really went quickly at the games, and too soon you had to move along the midway. And there, toward the back, were the carnival tents. Jojo, the Dogface Boy. The constant call of electronic barkers. "See them Live, see them All. Come see Sparky, the Human Dynamo, as fifty thousand volts of electricity race through his living body. See Sara, the girl with feet so big, so large, she never wore shoes in her entire life." There were Siamese Twins and the World's Largest Man and the Human Blockhead and the woman with no arms who combed her hair and put on her makeup with her feet. Oh, God, the list went on.

The first Human Oddity my parents deigned to take me to see was the Bearded Lady. We entered an ancient tent with a quiet, almost devout group of curiosity seekers and stood before a small, dimly lighted stage, waiting nervously until a man walked out and explained to us what we were about to see. And then he went off stage and came back leading a woman to a chair. She wore a burlap bag over her head with eye slits cut into the cloth and a hole for her mouth which moved strangely as she began to tell her story . "I was born in Huntsville, Alabama of normal parents. I have two brothers and three sisters who are all normal. . . . " And when she was finished telling her story, she reached up and removed the bag from her head. Her face was covered with long black hair and she simply sat there looking shyly around the dark interior. You could feel the awkwardness in that working class crowd, these unsophisticated freak show goers, and before I knew what I was doing, I burst out in nervous laughter. And quick as a shot, I knew I was wrong. The crowd shifted a bit and heads turned toward me, faces of disapproval and horror. Hot blood flooded my face, my neck, my shoulders and arms, as my feet went numb, legs cold. I labored to breath. And then it was done. We left the tent and entered the cool, dark, forgiving air outside. I vaguely remember my parents telling me that it wasn't nice to laugh at other people's troubles.

But the hook had been set. There was much more to see.
Posted by cafe selavy at 9:57 AM