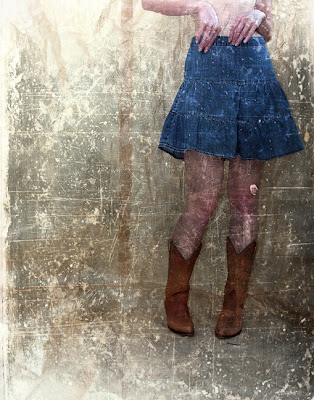 The Fair came and went, came and went, until I was in the throes of adolescence. Fourteen and running with a pack of older boys. Juvenile delinquents. Certified. And on those two weeks of March nights, we would hitchhike to the fair. I had been hitchhiking a good bit by then. It may have been dangerous business, I don't know. But we always got rides. It was easy.

Delinquents don't use main gates. Ever. And so we did what was obligatory and jumped the big hurricane fence that enclosed the fairgrounds in back where all the tractor trailers and Airstreams were parked. We did this again and again, trying not to tear our pants or flesh on the jagged, wobbly tops that inevitably would sway as we crested and throw us the ten feet down on our faces or backs. "Quiet, quiet," we would laugh. One night, we almost learned our lesson when we came over the fence in the dark and found ourselves facing a man's back. He seemed to be washing in a basin, at least that is how I remember it. We stood still, not knowing what to do. And when the man turned around to face us, it was Jojo, The Dogfaced Boy. Whoops and hollers, and everyone at once jumped back over the fence, scratched, bleeding, but safe back on the outside. Then the bravado, screaming and laughing. But we did not go to the fair that night.

The county fair had burlesque shows back then, "Hoot Shows," we called them. Outside the tent, a rough barker would speak low into a handheld microphone promising unmentionable things in giant innuendoes. I had passed these with my parents as a younger boy. My father would linger before the stage in front of the tent on which the barker paced, and sometimes the barker would call out a sequined gal who would stand placidly in fishnet stockings with one leg cocked as a challenge. But we would stay only as long as that, and then my father would look at my mother and we would move on into the night.

At fourteen, I was not old enough to buy a ticket into the Hoot Show, so my friends and I rolled beneath an opening one night in the back side of the tent where we got our first glimpse of the forbidden world. Honky Tonk music blared from an old PA system while an ancient woman paraded with boas around her. We were afraid and did not stay long. I am not sure if we were afraid of getting caught or afraid of what was going on inside. As scary as hell is, it still intrigues us.

When I was sixteen, we dared to try to purchase tickets to the Hoot Show. To make ourselves look older, we all lit cigarettes and slouched as much as possible. With a furtive glance, a worn out man took our money and told us to hurry up and get inside. The thrill of wrongdoing filled me.

On stage, a short fellow who looked like Red Buttons dressed in a plaid jacket and a porkpie hat was telling dirty jokes while a woman wearing shiny tights walked through the crowd carrying one of those old fashioned cigarette trays filled with "illegal" French Ticklers, dirty playing cards, and strange rubber devices for which I had no words. And then the man introduced the first dancer. She must have been fifty, a one-time burlesque performer now reduced to this, doing the bump and grind at the county fair for rednecks and hillbillies--and young boys who had yet to see such things. And when she was done, there was Tara the Tassel Twirler, a younger woman whose main talent was swinging the tassels on her ample breasts, first left, then right, then, for the finale, in opposite directions. By now, even at my age, the absurdity of all this had begun to set in, but it seemed somehow lost on these older men who hooted and hollered as if they were rooting for the home team. And then, for the piece de resistance, we were introduced in more solemn tones to a woman who worked with giant fans, revealing bits of flesh here and there as she moved her props back and forth, up and down. Apparently, from the pious reaction of the rag-tag crowd, this was what passed in some circles for serious art. And then it was over and we were gone, uncertain of exactly what we had seen but knowing we had seen something that we were surely not supposed to. We had been initiated. We felt we were now what might pass for men.

It wasn't what I expected.
Posted by cafe selavy at 9:59 AM