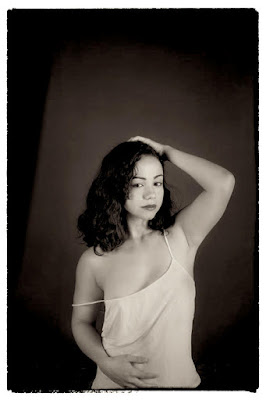 I got to go to the studio for a few hours yesterday.  Nothing worked.  It takes a lot of time and failure to make a process that is successful.  Much of the time, I just sat and thought.  I kept wondering what was wrong with me.  Maybe I did have a stroke.  But no, I just needed to think things through before I could act.  Mix these chemicals.  Put these trays in the changing bag.  How does the Black Cat 4x5 work again?  Testing the camera, not sure what I was doing.  Loading some film, going outside to shoot it, thinking maybe I was doing it right.  Putting the film in the monobath developer.  Eight minutes.  Nothing.  Try it again.  Nothing.  Make a print on the Epson.  The printer was all kinds of scary fucked up.  Worrying that the heads might be toast, changing inks, running it through a cleaning cycle. . . and then like a miracle, it worked.  It worked, but I had not gotten the levels on the image I was printing right.  Try another.  Make a print on Pictorico transparency film.  What had I thought to do with this again?  It looked wonderful. Why was I making a print on transparency film?  I tried backing it.  Not quite what I had in mind.  Glass, maybe?  A mirror?

The hours slipped away.  It was time to go home and begin cooking dinner for my mother.

After she was gone and the evening was finished, in bed, I thought about photography.  What am I going to do?  I think of the money I need to spend if I want to make platinum/palladium prints.  I think of the money I must spend to make wet plates.  Then I wonder why?  Suddenly I want to make portraits with my Hasselblad.  Wait--I don't have a Hasselblad.  I have a Bronica, but I want a Hasselblad.

I just need to start.  I need to try again.  It is too dangerous, maybe, to live that life again.  Maybe I have gotten too old.  Some people are happy taking pictures of old buildings and abandoned cars and old, forgotten tools and machinery.  Others are fascinated by landscapes.  Why not me?  Why am I drawn only to the things that can bring me trouble?  I read Edward Weston's "Daybooks" in college.  I  was drawn to his life and his photographs.  Maybe that is what did it.  Then there was Robert Franks' strange visions, he taking pictures where he shouldn't.  Diane Arbus.  Sally Mann.  Pictures and lives.