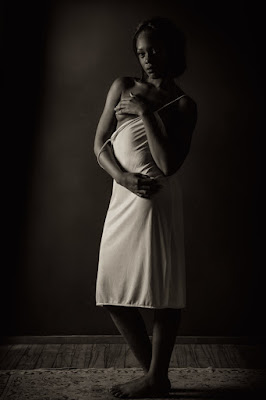 I can't figure out which, really.

Halloween is a bit of an imposition for me, though.  I can't stand to get dressed for work, so you might understand that I don't go in for costuming.  There are adults in love with costuming, I know, and they plan their Halloween outfit for months.  Such things mean nothing to me.  I don't look forward to seeing the kids, either.  Does this make me a Halloween Scrooge?

I missed out on carving the pumpkin.

Now that Playboy has become a quasi-literary version of Maxim, I've lost the romance I once had about the vision of life it presented me, a poor, redneck/hillbilly boy in an impoverished neighborhood.  Back then, though, I couldn't wait to see its version of Halloween.  It seemed deep and rich and minimized and sophisticated, with debonair men in tuxedoes and and women in couture dresses, each wearing a simple, black Mardis Gras mask--hey!  Wait a minute!  Hmm.

The world caught up with the Playboy Philosophy, hamstrung and hog-tied it, and left it behind.

I am not championing the Playboy Philosophy.  That would be a mistake.  I am simply (oh!--I never trust that word when other people use it) recognizing the influence it had on me as an adolescent.

"Ooo," I hear some co-workers say in judgement, "another piece of the puzzle."  Yes it is.

Back then, Playboy always seemed svelte to me, stripped of clutter.  And I was a reader of popular magazines back then, too.  We had a household full of them.  My parents had to buy them when I got a job selling magazines in junior high school.  "Life" and "Look" and many others.  I had to hide Playboy, of course, and read it only when my parents weren't around which added to the romantic mystique of it, I am sure.  The life I lived with my parents, and the lives of everyone around us, was filled with "things."  There were nick-nacks of all kinds, "decoration" it was called, just junk, usually, things that were supposedly "pretty" but which were cheap baubles that looked like a version of beauty viewed through a twisted piece of warped glass.  Outside, the yards around the neighborhood were littered with old boats and cars and camper tops and tires--anything, really.  Very few yards were free of big patches of the sand spur plant.  These were working people.  Who had time?

But between the covers of Playboy lay something else.  "Look" and "Life," slick as they were, seemed poor and littered, too, compared to Playboy.  The magazine's look performed its aesthetic theory.

You may think I was enamored with the women in the magazine, but you would be wrong.  I liked seeing naked women, of course, but not these women.  There was nothing warm about them.  They performed the aesthetic theory, too, but that part wasn't mine.  They were intimidating to me and not at all "the girl next door" as Hefner liked to say.  In his neighborhood, perhaps, but not in mine.

But I stray.  The magazine's October, November, and December issues were always my favorites.  They presented the Holidays stripped bare and clean of the clutter of my own culture.

Maybe I will dress up tonight after all.  I'll put on some formal wear and make a martini and play Miles Davis's "Kind of Blue."  I'll wear a wry grin, of course, and see what I attract.

But I'm not sure I can perform the theory.
Posted by cafe selavy at 8:11 AM