The Face of Social Justice 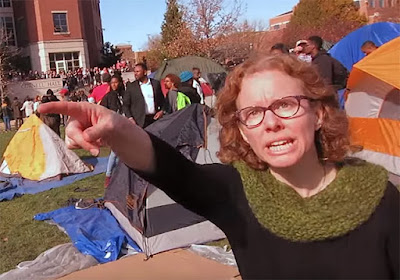 Here's a photo of one of the biggest assholes of the week.  You've already seen it, I'm sure, but if not, watch this.  She teaches media for the School of Journalism at the University of Missouri. Her name is Melissa Click.  She has no business in a college of any kind--maybe the Barber College.  She is, I'm afraid, the voice of the left at U.M.  I don't know that for a fact, so. . . I just surmised it from the video.  Look at that face.  This is the Face of Social Justice.  If she is allowed to remain on the faculty of the school, students should boycott.

But they won't.  Did you see how they immediately obeyed this witless twit?  If she had yelled out, "Kill this dirty fucker now!" I have my doubts we would have heard from him again.  I wouldn't want to be one of the kids shown in the video.  It is a permanent record.  They will have to live with that for a lifetime.

But Professor Click?  She will be on all the morning talk shows.  She will get prepped and primed and she will come on as a rational human being who was simply overwhelmed by emotion in response to the injustices she saw all about her.  She might be asked if she thinks it right to meet injustice with intolerance, and gently she will say no and that she has already apologized for that.

Or, perhaps, she'll do the better thing and join FOX News as an analyst and commentator and really capitalize on her moment of infamy.  That's what I would do.

I might have liked her more if she hadn't involved students and had just busted up the kid on her own.  It is that insipid crying out for others to do her bidding that is so very awful.

But we meet these twisted ideologues every day.  I know a vegan who is tenting her house for termites.  I don't blame her, but. . . wtf?  I guess she figures its O.K. as long as she isn't eating them.

I keep wondering what the kid with the camera was about to expose by filming by the tents.  It seems very cultish to me.  But he is lucky it wasn't Black Muslims from the Nation of Islam.  Those guys don't fuck around.  I've seen them in action.  The kid would have run away faster than The Gingerbread Man.  Allahu Akbar.

And it is true at my house this morning.  I went back to Bed, Bath, and Beyond last night with a 20% off coupon and bought the Cuisinart Grinder/Coffeemaker.  They even said they'd take back the hideous Mr. Coffee without the box or a receipt.  I am a fan of B,B, and B now, a big fan.

And so this morning, I sit with cup after cup of fresh ground Kenyan coffee.  I am a happier man.  An effete man, sure, but happy in my snobbery.  I will take greater pride in my coffee maker than ever before.  I will show it to people when they come to the house.  I don't recommend getting one, though, if you are happy with your Mr. Coffee.  Your coffee is fine--for you.  But it is like everything else that goes into your mouth.  Once you've upgraded. . . you can't go back.

Some of you will agree with that.

O.K.  The factory whistle blows.  But if you are anything like me, kids, you will write an email to the School of Journalism at UM and tell them what you think of Ms. Click.  I will revel in it.
Posted by cafe selavy at 8:54 AM