The Trouble with White People: Pt. 2 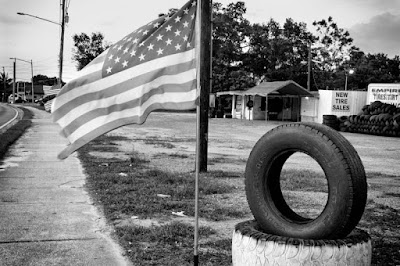 Flags and tires.  A country rooted in it.

With the injury to my shoulder and my forced absence from the gym, I have been undergoing a mental transformation.  I don't need to "train" in the gym.  For what?  I don't even need to workout.  All I need to do is exercise, right?  It is exercise, not "training," that is good for one's health.  When I read all those articles about exercise and health, I don't see the "moderate" part.  What the hell is "moderate exercise" anyway.  It is a phrase that has as little substance for me as "be careful."

But I am trying.  I have returned to the gym to do moderate exercise.  Hell, after a lifetime of busting myself up on a daily basis, it will be easy, a walk in the park almost literally.

But the psychological component is harder.  I look in the bathroom mirror and see a man in decline, skinny arms, skinny legs, frail. . . how can that happen in ten days?  But, I think, I will learn to live with it.

I was looking forward to my moderate workout yesterday when I went to the Y.  It would be moderately easy, moderately difficult, but the effects would accumulate and give me a nice, healthy nirvana.

My first exercise was going to be incline bench presses, three sets, light and blood pumping, thrilling, really.  There was a fellow just finishing up a set on the only incline bench in the gym, so I walked over smiling and asked, "Do you have someone working in with you or can I work in?"  When there is only one piece of equipment, it is customary, I think, to accommodate others.  And I was smiling.  But the fellow, who was much bigger than I and who looked like a young Issac Hayes, said, "I don't have much longer."  So I said O.K. and waited thinking he had one set left.  I helped him put on the weights for it.  He rested for a minute, then did his set.  But he wasn't done.  So he rested a minute and did another.  So I said to him, "Hey, I could do my sets while you're resting."  He gave me a cold, fairly hostile look and said he'd be done in a minute.  But he wasn't.  And I didn't want to be the fellow you told to go take a piss while you did what you wanted to do because you thought you could.  So I said something and he said something, and then, being pissed about everything in life right now, I said some more things.  Then I squatted down a few inches in front of him where he sat on the bench so we could be eyeball to eyeball.  What surprised me was that my heart rate didn't seem to be rising.

And I thought, holy shit, this guy talks like one of those t.v. shows.  Really?  So I waited until he got louder and stood up.

"I need you to give me some space," he said loudly so that now people were looking.  I stepped back and made a gesture acknowledging the space, but it wasn't enough, and now the trainers that work for the YMCA were surrounding us.

I twirled my pointing finger gently around my right ear and said, "I asked this guy if I could work in with him and he got all nutty."  And he looked it.  He kept yelling about his space like we were in Ferguson and I was a white policeman.

I looked around the room with a little grin that showed who was the reasonable one, a grin that said, "We got a nut on our hands."

In the end, everyone agreed.  Look out for the big, black fellow.  He's obviously a little off.

Of course, he was an asshole, but I knew I had pushed his buttons, knew it was my fault because of everything, really.  I am not a happy man just now.  I don't know what I was doing, but what surprised me was that during the whole incident, I know my heart rate didn't go up much at all.  There was no adrenaline.  There was just a grim anger and a resolute lack of contrition.  And a good amount of wonder.  Why didn't he just hit me?  I expected it the entire time, expected him to rush me and overwhelm me with his superior size and youth.  But I know how I looked.  I know I had crazy eyes, and I've looked at little guys with crazy eyes before.  Not a fun thing to look at.

But I am a smart guy, and I had some good insights into things as a result of all of it.  My ego is beaten and battered and bruised by time and circumstance, as they say.  All my life, whenever I have felt fear, it wasn't the thing itself I feared but how I would seem if I was defeated, beaten, or overwhelmed.  It was ego that caused the fear.  And the fear was about embarrassment.  It would be humiliating not to be a hero, I guess.  Always.  Always.  What I mean is that I didn't fear the beating, really, didn't fear him because I wasn't supposed to be able to beat him up.  If I got a black eye and a chipped tooth, nobody would have been surprise, nobody would have thought him a winner.  Nope.  No hope, no fear.

Who does one blame for such a ludicrous attitude?  Father?  Mother?  T.V. shows and movies?

All of that, of course.  But if you live long enough, I think, you can run out of fear because any victory is a surprise.  You are not supposed to win any longer.  Your victories are behind you.  All ahead lies a barren field of what once would have been humiliation.  There is not enough fear in the world to face all that.

I hope I don't see that fellow again, though.  I really don't.  I was feeling like the photograph yesterday, but not today.  I'm a gentle poet of a fellow once again.  I want a peaceful, gentle life full of books and films and art.  That is it.  That is all.  Om mani padme hum.
Posted by cafe selavy at 8:01 AM