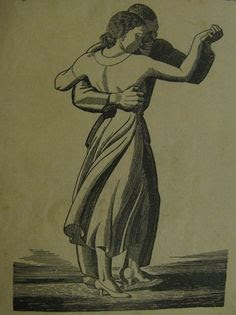 I'm still not on a computer with any of my work on it, so I'll use the mythologizing prints of Rockwell Kent in my stead.

Ili helped me work on the studio yesterday.  That got things going.  We moved at least half if not more of the things there.  Much of it was moved to the trash.  Other things went to charity.  I am not good at deciding things, but Ili hasn't any attachment to the things in the studio and often quite the opposite.  All costuming, for instance, is now gone.  No questions asked.  There will never be a photograph of a girl in the green slip or the white camisole again.  She carried things gingerly between two fingers at arm's length to deposit them in trash bags.

One of the sad but inevitable moments was when I put two little pieces of styrofoam packing into the dumpster.  Oddly, they were the essential tools in inventing and producing every Polaroid image that I made.  I could have made something much better, but I continued to use those two little packing cart pieces from beginning to end.  Now they are going to live in a dump for the next million or so years.

I moved boxes and boxes of film to my garage.  Most of it was instant.  Why do I have so much?  Why did I buy it?  Why did I never use it?  Much of it is the first Impossible film attempts, black and white prints that fade to nothing within a month.  They are good for snapping and scanning, but they will not last.  I have an idea, though, for saving the images (clever boy that I am), and I may begin shooting them up.  Except for one thing.  I think the SX-70 camera that I had repaired is not working again.

I have two very expensive 8x10 Polaroid film processors that need to be sent back for repair, too.  I must do that because I have boxes of New 55 8x10 film yet to shoot.  After it is gone, I will probably sell the 8x10 camera.  Either that or I will buy more stuff so that I can shoot 8x10 tintypes.  That is an outdoor activity.  I hesitate, though, for now it seems that everyone is doing it.

I moved three 4x5 cameras and three Leicas and three Nikons and numerous other small and specialized cameras.  Furniture went outdoors.  The 'hood took everything.  At one point, the new landlord stopped by.  He is a famous asshole, a big guy not averse to punching people, and I know that if I continued to be around him, we would quarrel at best.  He said that he was closing on the property on Wednesday, and I asked him about the rent.  He said he didn't know, he would have to review the contracts, but then he talked about the improvements he would be making which didn't give me any hope that the rents weren't going up.  He looked around.

As we emptied the studio, and as it got larger and larger, I told Ili, "This sure was a good deal, huh?"  And I said the price.  "It was an unusually wonderful deal," she said.  Just blocks from the Boulevard, walking distance to all the wonderful bars and restaurants, it was a dream.  And to prove how wonderful it was, we took a lunch break and walked two blocks to a place we'd not been to yet.  We sat inside and had two good beers and a sandwich each.  Life was good.

Today I will be going through some of the prints I have packed up.  People are coming by to look at some stuff and I want to separate the prudent from the imprudent stuff.  One must always speak to one's audience.

As we were finishing up in the late afternoon, my buddy came by and we sat out on the big loading dock and talked.  The true artist behind me came out to chat as well.  We decided to go have another beer on the Boulevard at a place we'd never tried but had meant to.  It is in a hidden gardens, a small bar that looks dark and lovely and mysterious.

We went next door to a place that has gotten good reviews but which I found a bit "theme park-ish."  The wait staff was a joke.  I've never seen anything like them assembled in a single restaurant before. But I ordered some girly special mimosa that tasted like a cream sickle and then another.  And when we finished it was moving toward sunset, so my buddy walked us back to the car where we said adieu.

At home, we decided to sit out on the deck and have a drink while watching the last light fade.  Another buddy who takes care of my cat when I am gone stopped by.  He had his own open beer, of course (he is a one-handed driver), but he was O.K. to take a scotch.  I emptied the bottle and we chatted, he telling tale after tale to Ili's delight.  She finds him fascinating, and he fairly is.  He is a twin, and neither of the boys have ever married living instead like a couple of fraternity boys their entire lives.  But the scotch was gone and we needed another drink, and all I had was some Old Crow that Ili had gotten to put in the eggnog, a recommendation of the man from Kentucky who worked at the liquor store.  I have never tasted such a horrible liquor in my life, but what can one do?

After dark, my buddy headed home to make dinner for his brother, and Ili and I went to the store to stock up on scotch and to get the makings for our spaghetti dinner.

As soon as I finish this post, I am headed back to the studio to begin working again.  I have much to move today.  But I am getting close to emptying it and should be done before the end of the year.  Perhaps then I will pick up my cameras and begin looking at the world again.  For now, though, it is all moving and meeting with friends and having cocktails on the deck.  I cook for my mother tonight who has never known that I had a studio in the first place.  She will ask what I did all day, and I will say that Ili and I went walking on the avenue and took a nap or some such thing, liar that I have become, but boys need to keep some secrets from their mothers who they love, no?  I hope that is true and good.