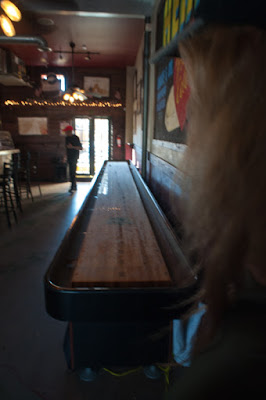 I've been too housebound/townbound, so yesterday afternoon, after a long walk to a hipster village for a acai granola bowl and a long return, Ili and I showered and wondered how to spend the pretty afternoon.  "I know," I said, "Let's drive to a faraway town."  Ili hadn't been there in a decade or so, and so we packed our stuff and headed out through hill and dale that used to be all country roads but which are now populated by cheap out of town housing developments that sprout Chilis and Bennegans and all manner of slick fast food things, and shopping centers with all the Dollar Stores you could want.  It is the cancer of our time, of course, the greed heads and local politicians making deals that are "good for the community."

The highway was full of cars, but eventually we turned off the highway onto the road that led to the scenic town on the lake.

You couldn't find a place to park for miles in any direction.  Almost.  But I drove right to the city's center and lucked into a spot just off the square right away.

"C'mon," I said, "Let's go to the hotel and sit on the porch and have a drink.  The hotel is an old one, built in the 19th century, and is the oldest continually operated hotel in my own home state.  Once a resort for the wealthy, it now is the site of grand weddings and other celebrations.

When we got to the porch, it was packed with yahoos.

"I need the restroom," one of us said.

Just then, a man approached to see if he might accommodate us.

"We're just going to get a beer and sit outside," I said.  But there were no tables.  "It's O.K., " I told him.  "We'll get beers and sit in the rockers.  He said that the bartender's name was Rachel and that she would hook us up.

When one of us came back from the restroom, we approached the beautiful little bar set in the shadows away from the big windows on the other side of the room where drinkers sat at old oak tables on top of darkly colored old rugs.

"Rachel," I said with a big smile.

There were a couple of IPAs, and Ili said she loves IPAs, so we got a couple and two cups of southern gumbo.  Rachel was a corker and set us good with deep go cups of steaming soup and two more beers.

I felt lazy and Ili didn't mind sitting on the sunny porch watching the people walk by.  There were a couple of festivals going on in town this weekend we found out, a music festival and a big antiques festival, so the town was hopping if you like that sort of thing.  I was content to eat gumbo and drink beer and look out over the big lake from which the town had taken its name, the little seaplane at the end of the dock boarding passengers for a fifteen minute, fifty dollar flight.  People came and people went asking us if anyone was sitting in the rockers next to us.

"You all don't smoke, do you?" one woman asked.

But they didn't stay long.  I think I must have been talking crazy talk.  It happens sometimes.  Some people just have certain opinions and can't abide by others, I think.  That's just the way of things.

Eventually we decided it would be good to walk the town and see the sights.  It was a hilly town, and going down was alright, but we were struggling going the other way.  Fortunately, the town wasn't a large one, and within a few blocks, we found the restaurant I wanted to show Ili, an old house with porches and verandas and a cool old bar upstairs.  She liked it, she said.  Old hotels and old restaurant and bars are irresistible, the history of intrigue and romantic trysts and corruption somehow trapped there like an insect in amber, beautifully enshrined forever glistening in time.

But time has slipped away this morning, and I haven't any more time to write.  It is O.K.  You can finish the post any way you like.  Perhaps it is as simple as coming home and making guacamole and mixing up Barbencourt rum and tonic with fresh squeezed limes and watching the new Mad Max movie together on the couch.  Life is good when it is simple as that.
Posted by cafe selavy at 9:22 AM