Another Snapshot of People I Don't Know 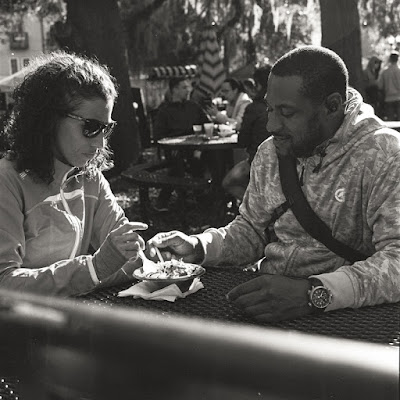 Again. . . I really forgot that photography literally meant "writing with light."  At least with film, you can't shoot in the dark, and the factory is taking up all of my day time.  So after work, I head to the studio. . . no, wait. . . I have no studio now.  It is difficult to be a film photographer with a day job.

But I got something exciting in the mail yesterday.  I ordered a beater lens on eBay.  Got it for $48.  It is an old Nikon manual focus 24mm lens.  Nikon, unlike Canon, lets you use old heritage lenses on the new digital cameras, so I mounted it on my D700 and snapped some frames at home.  Magic!  In college and after, that was the only lens I used.  I haven't shot with one in many years now and had forgotten how much it matches my vision of the world.  Those few frames brought me back to it.  I was jumping up and down like a kid.  And let me give you a bit of advice.  At wide angle, manual focus lenses are a breeze and much, much cheaper than the autofocus ones.  The incredible depth of field assures you that almost anything will be in focus. I will make a little walking safari with this camera and lens today just to see if I can match my old way of seeing.

One night, drunk, I was texting with Q and he convinced me to buy a Nikon 50mm f1.4 lens, too.  I didn't need it, but I found one cheap on eBay and bought it in a frenzy.  Immediately, I had buyers remorse, but now that it is here, I like it.  I also have a 35mm lens for the camera, too, so I'm rather back in digital business, I think.  Good enough.

But the Hassie is my baby for now.  It will stay with me all the daylight hours this weekend.  And I have a light meter now, so exposures might be better.  I must give you all a heads up, though.  There are free apps that you can download that turn your camera into a light meter, and they are pretty darn good.  You really don't need to spend $300 on one made simply to measure light unless you are working with strobes.  And you won't be doing that, so if you need a light meter, just download one.

I took a chance with some women yesterday and talked about Shrillary Clinton.  To my surprise, they agreed.  I was surprised because the are feminists and plan to vote for her.  They agree with much she says, but they, too, think she sounds like nails on a chalkboard.

"Can you imagine her being your mother?"

"No wonder Bill seems so nice."

Nobody blames her, of course.  Everyone respects the fight she's fought.

And everybody thinks she will take anybody's money.  What she will do for it is a matter of contention.

But if she does not go to prison before the election, she will be the next president of the United States.

The Koch Brothers just gave her a bunch of money.  But they did the same for the Bundy nuts.  Those boys got 'em some serious kink.

The little hipster is still asleep.  The cat is, too.  Sunlight tumbles through the half open blinds to make sweet patterns on the furniture, floor, and walls.  Camera gear litters the tabletop.  A day of possibilities stretches out ahead.  Sometimes that is too much.  Sometimes not.  I will try today to be happy with whatever fortunes fall my way.
Posted by cafe selavy at 8:16 AM