Buying a Bit of the Past 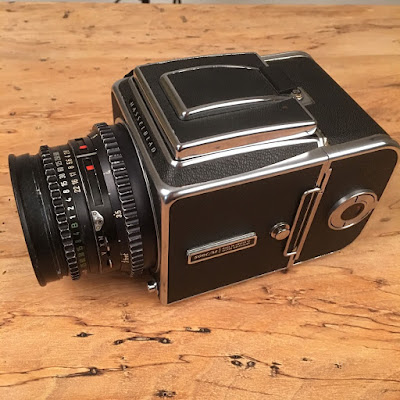 I probably fucked up, but this is what I bought.  It was the cheapest Hasselblad I could find.  I won't tell you how much it was (in case I hate it and want to sell it to you later), but if it works, it will have been a good deal.  It is an old one.  I'd rather have had another, newer, fancier one, but my parents were Depression Era kids, so this is what was embedded in me.  This is what I get.  It should be here in a week or so.  If I use it and want a better one, I will sell this on eBay and get the other, but being suddenly poor and not knowing the cameras. . . whatever.

Yes. . . suddenly poor.  I called three tree companies today to come and give me estimates.  I have a tremendous amount of tree trimming and removal to do.  And that, my friends, is only the beginning. There is so much to be done (by others).  I seriously wondered today what it would cost to hire a "project manager" to take care of everything for me.  I used to be married to one, but that was a long time ago.

As I ate dinner tonight alone in front of the television, I watched the first half of the Jack Black version of "King Kong."  Don't watch anything past when they get to Skull Island.  Up to that point, if you are a romantic, there is no film that is better, I think.  The sets, the cinematography. . . it is all a dream.  After they reach Skull Island, it is just another adventure story, but up to that point is something incredibly else.  Tramp steamers.  What can I say?  Read Marlon Brando's "Fan-Tan," if you haven't.

There is nothing like that any longer.  I want to buy a vintage black and white hat like the captain of the ship wore in "King Kong."

I can't find anything like it for sale on the internet, but perhaps I am using the wrong search terms.  If any of you find one, let me know.  I just bought a camera.  I'm in the buying mood.

Apple has shut down its free radio stations.  I have been listening to them for years now, but this week when I went to turn it on--gone.  They want me to sign up for a free trial of whatever they are pushing now.  I've listened to those stations for a very long time, and some of you have listened to the stations I have made, too.  We've listened to those idiotic Fabreeze commercials and the irritating insurance commercials with that hideous woman, but these were only momentary irritations.  The jazz station I had was worth it.

My life is impoverished in a significant way now.  But that is the way of things always.  That station has gone the way of tramp steamer hats and my Leicas.  It is hard to hold onto anything at all.