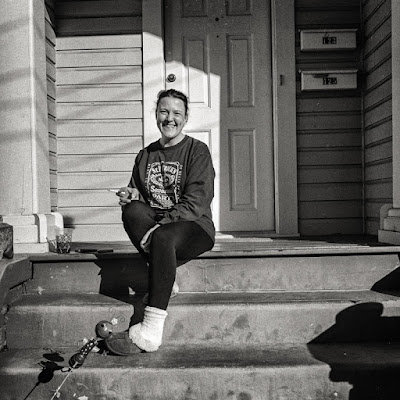 They like to smile.  You have to watch for that.  They have learned that.  "Don't look so sad.  Smile!" So. . . tell them you will take one smiley picture and then another or more.  Only let them smile if they are homecoming queens.  Then it is apropos.

I'm going crazy with the camera decision.  Just one.  Which do I choose?  I can buy the Hasselblad I'd rather have for about $2,500 or I can buy one almost as good for about $900.  The cheaper one will be older which means it might not be as accurate and it is more inclined to breaking down and needing repair.  Or I can replace the Mamiya 6 with which I took this picture, but as you can see, there is not a lot of out of focus stuff with it.  It is like a very expensive Holga camera.  But it is fun and easy to use.

Or I could focus on other things that I need to do.

More of the old world disappears.  Does anyone dream of owning a beachfront bar in Majorca anymore?  Does youth care about the past and its colorful characters?  Do they even like the idea of character?  I read this today (link) and wondered:

“Gordon Goody, who combined the rakishness of James Bond with the bravado of Jesse James to help conjure up Britain’s daredevil Great Train Robbery in 1963, died on Friday in Mojácar, Spain. He was 85. His death was confirmed by officials in Mojácar, his adopted Andalusian town on the Mediterranean, where he owned and ran the Chiringuito Kon Tiki beachfront bar after he was released from prison in 1975."

I was told by one of the younger workers about a meeting at the factory yesterday in which an executive said that he didn't want to develop a plan of action that people could bitch about later on.  The young fellow called him out for his misogynistic language.  Be careful, people, or you will end up in HR and subjected to some sensitivity training.  The executive's name is Dick, and so I opined that maybe they would want to make him change his name as well.  That didn't go over as I had hoped.

Gordon Goody was a thief, though, just like the person who stole my cameras, and there is no romance in that to me just now.  Sometimes my thinking is off.