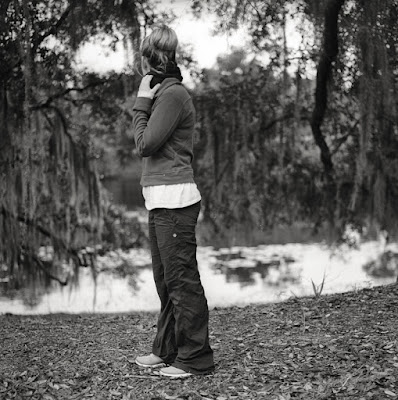 I shot the first roll of film with my new Hasselblad yesterday.  I didn't have a meter, so I had to ballpark the exposures.  Then I came home and souped the film in the one bath developer/fixer, the R5 from the New 55 project.  That's what they say.  "Souped."  I was nervous about the whole thing.  I've never been very successful at loading medium format film on the spool.  It takes me forever, usually, and I always fuck it up.  But I watched a YouTube video and learned something I'd never known before about loading the film onto a stainless steel reel, and it worked.  I had to heat up the developer, so I warmed some water on the stove and put a Ball jar full of chemicals in it until it was the right temperature.  Then I poured "the soup" into the canister.  Six minutes later, I pulled out the film, and there were images.  Holy smokes!  The camera worked.  The "soup" worked.  Everything worked.  It's just a bit like magic.

Excited, I took my camera downtown.  It was late in the afternoon and I still had to go marketing to get steaks for dinner before my mother came over.  It was a chilly but diamond clear day.  The light was simply crazy.  Before I had walked two blocks, I came upon a couple walking toward me who had a camera.  O.K.  Time to grow a pair.  I asked.  They posed.  It was the camera.  The girl liked it a bunch.  She was all dolled up in a retro way.  Turns out she wants to be a YouTuber.  She was a hairstylist in the shop we were standing in front of.  Her boy asked me if I was a "professional photographer."  No, I said.  He asked me about my camera.

After a long talk, we walked on to the park.  All along the way, I asked if I could take pictures.

It was the camera.  I don't do a lot of asking if I can take pictures, so the whole thing was a bit strange to m, especially how willing people were.  I was shy and bold.  I'm pretty sure I was taking lousy pictures, but it was a kind of rehearsal or practice, I opined to myself.  I was simply learning.

After an hour, I had gone through a couple rolls.  Twenty four pictures.  Quite a feat, I thought.  Really.

By then, it was time to go.  There was a dinner to make and a Super Bore to watch.  Mom came over for steaks and stayed for the first quarter of play.  She missed halftime, though.  I wish I had.

The New York Times was brutal about Cold Play.  But I was first.  What was that boy doing?  Kneeling all the time.  He couldn't stand up straight.  And he must have had some itchy balls, 'cause he couldn't keep his hands off them.  Then he asked everybody to get down with him, and Ili and I looked at one another.  WTF was he doing?  It was terrible, the whole thing, though that Bruno Mar sure can dance.  The Times compared him to M.C. Hammer.  Hammer time.

I watched the entire game, but I had to make a run to the liquor store somewhere in there.  They were out of the scotch I drink.  Hadn't had it for a couple weeks, they said.  I had to buy a much more expensive bottle, but it saw me through to the end.

I don't want to go to the factory today.  I want to go out and play with my camera.  But I have so many things to do, including renewing my tag.  I have to do that today or be illegal tomorrow, and I am getting too old to be illegal anymore.

I just hope I can find the paperwork I need to do that.  Etc.
Posted by cafe selavy at 8:50 AM