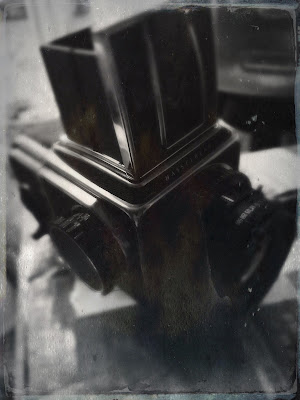 It arrived yesterday in the early afternoon.  Now I have my very own Hasselblad.  And it turns out, its a beaut.  I took it to the camera store to ask a question about the Compu-Synch EV lens system.  Fortunately for me, one of the old time camera guys was there, and he knew Hasselblads inside out.  I had really just gone in to buy some film and to ask the one question, but fortunately I was given an hour's clinic in the functioning and use of the camera.  He even got the camera repair tech to fix something on the camera that I never would have known wasn't right.  When I left, I felt better about owning the camera, for what he showed me was the incredible design and build of the thing and the simplicity of it, too.  It is like a Tonka toy.  Everything is a piece and comes off and can be exchanged easily.

Of course, another of the fellows there, an old Brit who sells camera equipment on the side (he just had a Leica M7 for sale which I wanted) said he just sold one in perfect shape for two hundred dollars less than I paid.  Why do they do that?  It is always and inevitably the case no matter what you buy or how cheaply you bought it.

"Oh, man, you should have asked me.  I could have hooked you up for half the price."

I have no light meter right now as my old one was in one of the bags that was stolen, but I have ordered one and it is on its way.  So today, I will use another camera to do light readings.  Then I will shoot with the Hassie.  It is lighter than I thought it would be, but it is awkward, too.  This is not an action camera.  I will need people to sit very still for these pictures.  My bad eyes make me yearn for autofocus.  I will learn to deal.

Pictures shortly.  I hope.  It is still cloudy and rainy here, and Ili does not let me take pictures of her which feels very unjust.

Oh the world. I am with Francis Bacon whose mantra "which he might have proclaimed almost brightly, was: 'Nothing. Nada. Just nada, nada'” (link). “Life’s just like that. We’re all on our way to becoming dead meat. And when you go in that restaurant . . . you see the whole cycle of life and the way everyone lives off everything else. And that’s all there is.”

He was dark like his paintings, I guess--“Everyone I’ve ever been really fond of,” Peppiatt quotes Bacon, “has always been a drunk or a suicide.” Bacon’s avarice — drink and sumptuous meals — is a last gasp of Western Empire, which, in the context of today’s pressboard furniture, is tempting to recall with nostalgia. “I think I’ll move into a hotel like this just so that I have a place to die in,” Bacon pondered. “I love the atmosphere of these luxury hotels, though I suppose with the way the economy is going and everything else, they won’t exist for much longer.”


Indeed, I would love to live out the rest of my life in a luxury hotel.

It is Super Bowl Sunday. I'm just signifying. We'll find out what it means tonight. Signified.

The sun is well up now, but there is no light, just the grey illumination of a cloudy day. I cannot play with my new camera yet. I'll have another cup of coffee and wait. There are worse things.
Posted by cafe selavy at 8:01 AM