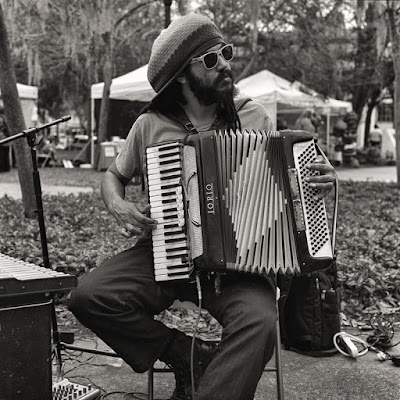 . . . and here is one that is too sharp.  I had Tri-X 400 film in the camera, so the aperture was pretty closed down.  Sharpness happens.  It is a challenge working with one ISO as opposed to working with an aperture setting and letting the camera choose everything else.  Normally, I would never shoot at f11 unless I was shooting from the hip in the street.  Having said that, though, I am inching closer.  Slouching, I should say.  I should have gotten closer and shot him from the knees up.

I have a Leica R5 SLR film camera that I picked up.  The exposures were all off.  I was hoping it was nothing more than a dying battery.  It was.  New battery in place, it is working like a charm. I am excited to shoot with it again.  I went online and looked for lenses because I used to have two of these cameras, and some of the lenses were with the one that was stolen.  I looked at a 24mm, 35mm, and a 90mm.  All of them are close to $1,000.  Each of them, I should say.  When I bought them, they were less than half that price.  Same with all the Leica M cameras and lenses.  But since they have made adapters to fit all the Leica lenses on any digital camera, the prices have skyrocketed.

Last night I decided that I will simply have to bite the bullet and pay the price if I want to own them.  I am close to making some bids.  Actually, I bid on a Leica M7 last night but was immediately outbid.  It will be difficult to get lucky on this, I'm afraid.

And as soon as I do replace everything, I'll be all about my digital cameras again.  I know me.  That is how I roll.  I know this, and still. . . .

Am I the only one?

They are fetishes, truly.  I have cameras sitting all over the tabletop where I sit and write this now, and just looking at them gives me thrills.  Not quite a chubby, but. . . you know.

What would it be like to have money?  I'd like to know that.  I have money, but I don't have MONEY.  I can live well enough, but there is no security in it.  I could go tits up in two seconds.  I have not trained myself very well in financial matters.  It is all too difficult.  And I have to admit it--I'm a little awed by people like Mitt Romney and Donald Trump.  What I mean is, having that kind of money would drive me insane.  All I would be able to think about would be losing it.  Oh, I know I could lose it.  I'd make terrible decisions and really bad deals.

I would be much better off just marrying one of them.  I would be like "The Queen of Versailles."  I think I would make very beautiful pictures.

I hear that everyone has had a hint of spring by now.  It is almost summer here.  The air conditioner will be on now until November.  I dreamed last night about surfing.  I do that every spring when the air turns warm.  I usually go once or maybe three times.  In the night, lying in bed, I think that I will surf early in the morning before work or late afternoons afterwards.  I will just drive to the coast and jump in the sea.  My waist will be trim and my shoulders broad, my hair the color of straw.  I will have the bluest of eyes and a rascal's smile.  I will listen to beach music and take my cameras with me everywhere.  I will eat fruits and vegetables and fish only, and I will find some spiritual peace.  I will be undeniable.

But that is not how it works out.  The drives are long and full of traffic, and the days are too full of things I truly need to do.  And, most importantly. . . I am not a good surfer.  I miss most waves and tire too quickly from paddling out against the sets.  You cannot paddle around them here.  No, you have to take a beating crashing through the waves you want to ride, and I REALLY get pounded.  I watch good surfers make it look so easy, then I flop and flounder and get driven back to the shore without ever getting past the break.  Then I sit on the beach awhile hoping nobody is laughing at me.

But the weather is here for taking advantage of, and in a month or so, I will make my way to NYC to make pictures.  I want to go to Detroit, really, and see the desperation and renaissance.  I just have itchy feet right now.  I want to travel.

And that is me, so not the Buddha, so full of desire.  All I need is a Sugar Momma, though, and everything would clear up.  Is that really so much to ask?