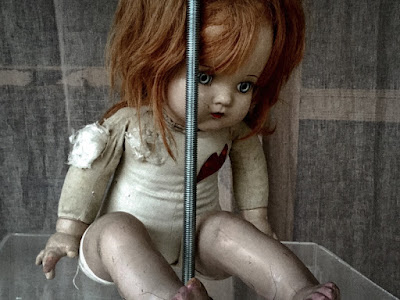 I thought I would have new pictures from my new M7 to post, but a funny thing happened.  I hadn't loaded the film right.  I was shooting happily away progressing toward the magic number, "36," which is the number of exposures on a roll.  When I hit "38," my heart began to sink.  We were sitting in a little hipster bar in Grit City having one of those 10% IPAs, the room all dark and light, me shooting with the aperture wide open hoping for some cool noir looking pictures.  "39," "40," etc.

I'd forgotten that part of the joy of shooting film.  I'll start over.

So. . . instead you get a picture from my iPhone. This was in a storefront window of an artist's studio. Grit City still has cheap rents, I assume, but they won't last much longer.  Grit City is becoming hip.  A river port, it was once a wealthy southern town, but the city fathers lost the battle for the location of the highways and trade dried up.  For most of my life, it has looked like a collection of Grierson mansions:

It was a big, squarish frame house that had once been white, decorated with cupolas and spires and scrolled balconies in the heavily lightsome style of the seventies, set on what had once been our most select street. But garages and cotton gins had encroached and obliterated even the august names of that neighborhood; only Miss Emily's house was left, lifting its stubborn and coquettish decay above the cotton wagons and the gasoline pumps-an eyesore among eyesores.


This once grand city had become a collection of abandoned warehouses and dilapidated mansions converted into boarding houses for drug addicts.  Within the last few years, however, gentrification has begun.

I thought I would load the camera and go out again today, but the weather is as it has been for days now, cloudy, rainy, muggy. . . . It is not a pristine Easter Day.

I feel badly this morning, for I did not get a basket of any sort for Ili.  I have a difficult time celebrating on demand, sure, but something would have been nice.  She is used to receiving Easter baskets with those little light medium robin's egg blue boxes in them.  I have not even gotten her a Godiva bunny.  I am dripping with guilt that will stay with me for a while.  Bad.

But tonight I am cooking dinner for my mother and my cousin who is visiting and for Ili, and I will try to make up for things then.

No matter, though.  It is Easter, and I have the Blahs.
Posted by cafe selavy at 8:52 AM