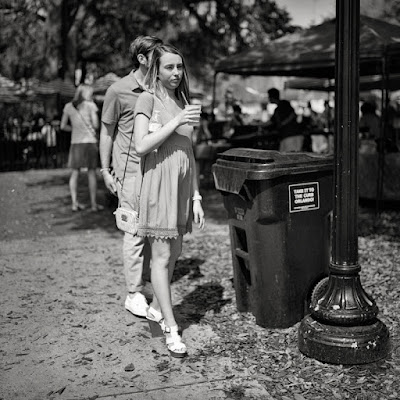 I have spent so much time alone over the years, I must have started to believe that what I do and think is "normal." Of course, they aren't.  That is why I feel so badly about not doing anything special for Ili on Easter.  Still, the day passed pleasantly enough.

It started with a long, long walk on which we passed a number of large, tony churches.  Easter services for the elite.  But what I noted most, oddly enough, were the Hooker Heals on so many of the women wearing Easter outfits.  Great calves, short skirts, and Hooker Heals.  It is the new normal, I guess, but I was shocked.  Churches have changed in the forty or so years since I went, I guess.

As we walked by, I felt the people were watching us with suspicion.

The weather has been outrageous here already, an abomination, really, and summer has arrived early with temperatures in the mid-eighties and an unnatural humidity .  It is hideously muggy.  And just as it does during the height of the summer, the world is beginning to close in.  The empty spaces surrounding things are gone--no air, and I begin to go mad.  I had to do something. . . and so. . . I began to declutter the house.  Everything, I thought, must go.

I started with the kitchen.  The countertops were filled with bowls and containers and knick-knacks that needed to go.  I took all the pictures off the refrigerator.  I got rid of anything that was a duplicate.  Then the dining room.  I took away vases and pots with pussy willows and books that filled too many spaces.  I emptied decorative containers that had become catchalls and threw away old credit cards and bank cards and scraps of paper from the 1990s.  I took old documents from a small desk that had piles and piles of old bank statements, tax documents, etc.  Gone to the shredder.  Ili began to help.  I took down all the old framed pictures that were littering the table tops and mantle.  We looked at the art on the wall and decided to rearrange it.  Pictures found better homes.  The house began to expand.  It was looking more like it should, ready to be photographed for the magazines.

It was late in the afternoon when we realized it was time to get the fixings for dinner.  My mother and cousin were coming for Easter.  Happy-Isa, we headed out for the store--which, it turned out, was closed.  Oh, yea.  Easter.  No matter, we'd try another.  It was closed as well.  Now, in desperation, I had one last hope of getting a roast and vegetables.  We were off for that old Pagan Whole Foods.  The roads had been empty up until this point, but suddenly there was massive traffic.

"You know where they are all going," Ili asked?

It was true.  Whole Foods was like a rat maze, but they still had a few small roasts left, not the ones I wanted, but the bottom roast would have to do.  The Romertopf was soaking.  Potatoes, carrots, celery, onions, garlic, and two bottles of Ili's favorite Cab.

"Happy Easter," I said, picking up the moderately expensive wines.  She gave me a generous hug.  I say generous because we both (all) know I didn't deserve it.

While things were cooking, my mother came over with my cousin from rural Ohio.  She has lived in the country her whole life, something you can still do there.  She still lives in the same town where all the family comes from, the same little town where I was born.  Some of her neighbors don't have electricity.  She got mad at the neighbor's kids for taking baths in her above ground pool.  She poisons groundhogs and skunks that get into her garden and shoots cats that become pests.  She tried poisoning them, she said, but they wouldn't eat the tuna soaked in Golden Malrin.  She shot the neighbor's dog.  That's what I mean by living in the country.  The evening passed well as she regaled us with tales over dinner that were every bit as good as Pollock's stories in "Knockemstiff."

Then dinner was done and we were alone again in the renovated living spaces, sitting and looking with the night's final cocktails.

Just before bed, C.C. sent me this (link).  Jim Harrison had died at his desk while he was writing a poem. Jesus.  Harrison's writing had been part of my entire adult life.  I began going to Key West while he and McGuane and the rest of that crowd were still there for the fishing.  His themes, like Matthiessen's, spoke to some wellspring in me.  In the eighties, he wrote for Smart Magazine, a literary achievement to which all references have somehow disappeared.  His food column was inspirational and became the backbone of his book "The Raw and the Cooked."  Sometime after the magazine folded, I met Harrison in Key West many years ago at a writer's conference.  I was standing with him when an elderly woman came up to say hello.  They chatted for a moment, then Harrison gave a start of surprise.  It turned out that the woman was John Steinbeck's widow.  Harrison began telling a tale of writing Steinbeck letters when he was young with real reverence. I asked them if I could get a picture of the two of them together.  It would have been a great picture and I was excited, but when I got the film back, the flash had been far too bright and you could only see a little bit of their outlines.  A historic moment lost.  I got pictures of Harrison though, and had drinks with him later as well, though it was not just the two of us.  He didn't really cotton to me anyway, but it was fun to watch him and to listen to him.  It was obvious that he had a different intellectual capacity than others.  When he and Thomas McGuane were talking, it was like an intellectual pissing contest that few are equipped for.

I sent the obit to Q last night, and he wrote back something wonderfully clever.