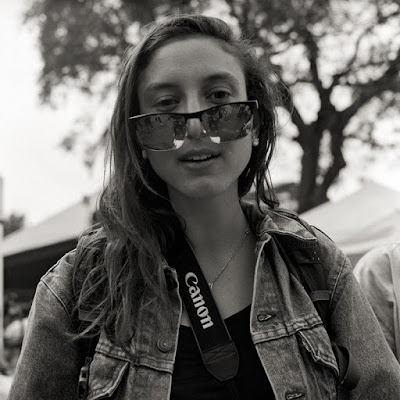 Shooting through the waste-level viewfinder, I am always shooting up at the subject.  This often causes exposure problems/silhouetting because of bright skies.  It also isn't a very flattering view.  I guess, though, this is our memory of being six years old and around three feet tall.  This person stopped me to see my camera.  I am surprised, really, how few people have ever seen a Hasselblad.  Many ask if it is a new camera.  Then, after my explanation, they wonder where I get film.  This girl was a student at a very good college.  You'll see another of her and her friends soon.

But the world seems to be more treacherous every day, and I am trying hard not to opine.  I vote this morning in my own hometown, but my vote will not count for much.  It is a symbolic act only, an officially sanctioned protest, one that is silent, unlike protestors at a Trump rally.  Their's does not seem to be a civil disobedience, and I think that they are less rather than more effective at getting people to vote against The Donald.  I think Trump's own words are all that is needed.  But people want to show that they are crazier than he is.  We have a real problem.

I might have made a mistake.  I bid on a Leica M7, a ridiculously low bid that did not even meet the reserve the seller had set, but nobody else bid on it. . . and I won.  The seller contacted me to let me know he would accept my bid.  Now I need to buy a couple lenses, and they are more than I thought, around $1,500 each.  I will try to find one that I can afford, another auction, but I am worried that I have lost my mind about this stuff.  I have a camera that I haven't begun to master yet, and I don't have a real project in mind.

Whatever.  I'll spend myself into penury and dissolution.

I've made a new station on iTunes radio called Primitiva, and I started it with a Martin Denny song.  Fun, fun music.  But I am on my free trial and in another few weeks, I will have to pay $10/month if I want to keep it.  I am pretty sure Apple will have its hooks in my by then.  Anyway, I just broke another habit.  The N.Y. Times cancelled my subscription because the credit card that I have on file with them has cancelled me because of a dispute.  I tried to sign up again, but I wanted a cheaper plan than the one I had, and the automated message said I was not eligible.  Really?  So I no longer have a subscription to the New York Times and they no longer have $35 of my dollars each month.  I will just have to go with CNN, USA Today, and whatever else is free online.  I don't care, really.  I am sick of the news.  I was just reading the cultural stuff for the most part.  I'll be fine.

"I'll be fine."  That's what people say.  We all know it isn't true, but we say it anyway.  I was convinced once that the old Victorian avoidance of things head on was wrong, the living behind veils and cloaks, the covering up of things.  I don't feel that way any longer.  We need more veils and more looking indirectly at things.

Except where my camera is concerned.  You should all be bare before it.