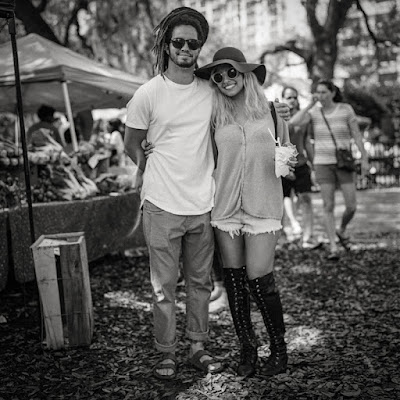 It's just not as easy to produce a film image a day.  There is no way I'll ever be able to do it, I think.  Out of a roll of film, there might be one or two worth processing (and yet, I usually do more).  But I think I'm starting to get a look I like with the Hasselblad.  That was "Part One."  Now I have to work on "Part Two."  No, maybe "Part Three."  "Part One" was probably having the chutzpah to approach strangers on the street.  "Part Two" was developing the look.  "Part Three" will be working with people in a more intimate way.  People want to smile when you point a camera at them.  I must let them, then ask them to quit it.  I can't have all these pictures of smiling people.  This will be the bigger challenge.

I've picked a fight with a fellow writing his dissertation.  He is a theorist and smarter than I am and certainly more current in his reading of critical theory.  He is a theorist for sure.  I picked this fight because I know I am not prepared to win it with him.  I get him angry and then he embarrasses me because I am under-informed and slow to remember what I once knew.  He is younger and prouder than I, so it is a fun fight for me.  I gave him my spiel about artists and critics, the one I touched on here a couple days ago, that critics and theorists will be revised but art will last.  He tore me apart on that one.  It hurt, but I am thinking.  He says that theorists are as important and as long lasting as artists.  He pointed to Aristotle.  He said that like art, there is the anxiety of influence, that new theorists borrow from and revise their parents.  Yes, he may be correct.  My line of thinking last night was that he only thinks about the social and political realms of art, that he is uncomfortable with the personal functions of art.  I thought to bring this up, to discuss aesthetics.

That is a difficult thing to do,

Today I will put together a portmanteau of phrases most used by theorists.  What I am hoping to find is that they are more suited to criticism of capitalist production than to art, that it is like using the language of business to talk about education.  I don't want to spend a lot of time doing this, though.  Only enough to convince myself to go in and have my ass kicked again.

It is useful to me only in the way it makes me think about the pictures I take.  I want to make certain I am doing the wrong thing.  That is the only way I will feel closer to being justified.  I want to get as far away from producing the art of the Soviet era as possible.  Ideology is terrible.  I believe the truth of that is illustrated by looking at the lives of theorists.  They all have deep, dark closets where they keep their secrets.  Their lives most often run counter to their ideologies.  I want to shout that ideology is a cover up for personal foibles.  And here is where aesthetics are important.  Maybe.  I mean Foucault liked getting pooped on by a fellow in a rubber mask, right?  Those were important aesthetics to him. Derrida was a cocksman.  And ooo that Betty Freidan.  Again, maybe.  I'm not certain, but, as Bill Maher says, "I don't know it for a fact, I just know it's true."

I'll work on these things and get back to you.  I'm sure you don't look forward to that, but I feel free to write like this on days when the picture might be pleasant enough if not redemptive.
Posted by cafe selavy at 8:09 AM