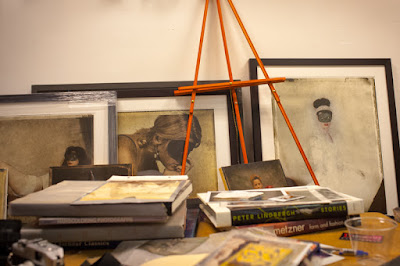 I was looking through old files for a picture to use with this morning's post and ran across this.  It was not an intentional photo, I think, but something I did testing exposure.  It brought back instant memories.  I got a call from the True Artist in the studio behind mine on Sunday.  I still have my printer there and I thought it was going to be about that.  Rather he was reporting that the new Crook of a Landlord had sent a letter informing the tenants that if they wanted to renew their leases, they would need to do it for a year rather than the monthly we had all been on.  I thought that was not horrible.  Then he told me that the Crook wanted four times the current rent.  Whoa!  I guess I am glad I moved out in December when the Crook bought the place from the old owners, a not for profit entity that didn't need the money and who sold it for an amount that anyone would have paid without thinking.  The building was not for sale, so nobody knew.  Their was a crooked deal with the Board of Trustees.  No one who worked for the company understood it, but we all did.  The Crook had an insider on the board and on the city council.

I have to make a decision about my printer.  I don't have room for it in my house, so I probably will have to sell it.  I didn't think I'd ever lose my little dream of a studio, but all dreams come to an end.  I was there for seven years.  It was in the best part of town.  All I had to do was turn the key and there was everything I had been doing just waiting on me.  I'll never have anything like that again.  Most people never do even once.  Selavy.

And yes, all things do come to an end.  After you've lived awhile, you think that there are too many endings.  Then you might realize that you have been wrong, that there are things that do not end.  There is an endless hum and there is the nothingness and meaninglessness against which we struggle an entire lifetime.  It stands in relief to all endings, the thing that makes them poignant.

It is when you dwell on the nothingness or on the ending of things that you are in trouble.  I'm trying to avoid trouble.

The three framed images in the photo are now hanging in my bedroom.  The cheap-ass easel is gone as is the camera sitting in the bottom lefthand corner.  The books are in my home and the table is in the garage.  I think I threw away the plastic cup.

There is much to do at the factory today, and there is the gym after work.  I don't know when I'll take pictures again.  There is nothing easy about it now.  Everything about it seems so hard.
Posted by cafe selavy at 8:19 AM