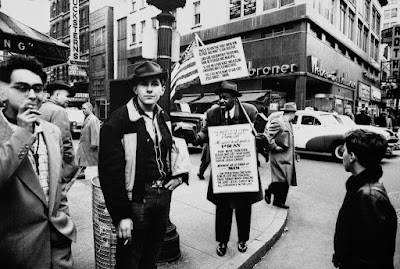 I've been watching documentaries on street photographers off and on for a few weeks.  Last night I watched one about William Klein.  I knew of some of his work, but I wasn't tuned in to his street photography.  The documentary was done by the BBC, was a full hour, spanned the length and breadth of his career, and it was pretty darn good.  I am both fascinated and dismayed by people who are able to commit themselves to something they want to do and then succeed in a great way.  Of course.  We all are.  There has to be talent first, but there must be something else, too.

I can only watch and wonder.

Factory days are long as the days lengthen.  I am expected to put in longer hours now, the payoff being a three day weekend.  I am chafing against the time I spend at my desk, however.  I am ready to chew off my leg to get out of the trap.  Life slips by in a series of meaningless events, small conversations, and a swelling paranoia.  I fear leaving nothing behind but factory work.

"They made him comfortable, I think."

Klein was a fashion photographer, too.  He shot mostly for Vogue until they cut him off for a number of radical actions.  He made fun of Diana Vreeland in a film and shot an anti-war documentary.  He lived in Paris but traveled the world.  He was irreverent.  But I think he was probably as confused and unsure as any of the rest of us. 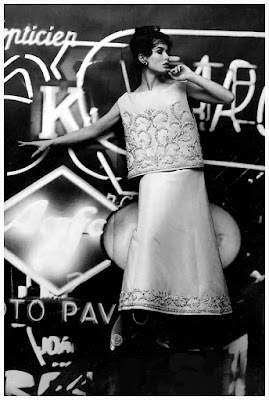