Champion of the World 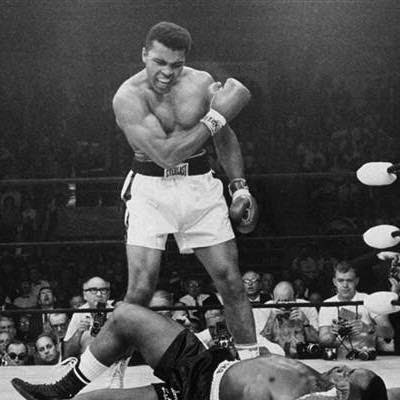 I'll do it.  I'll say something here at Mohamed Ali's death, too.  You probably haven't heard enough already, right?

This is probably THE most famous photograph of Ali.  He could knock a man out.  That is what he was good at.  It made him famous.  He was a simple folk poet, but that hardly mattered.  He was asked to teach all over the world (link).  Fame will make you smart.

I used to argue with my father about Clay/Ali.  My father was of a generation that though Rocky Marciano would kick his ass.  He was silly, of course. He came to be a great Ali fan.  It took awhile for people to have Ali in their faces.  Ali was indicative of the changing society.  I wanted to run the football like Jim Brown.  I wanted to box like Mohamed Ali.  They were heroes for young white kids.    That was how they changed America.

In the 1970s, Mohamed Ali eclipsed Charlie Chaplin as the most famous person in the world.  Ali was later eclipsed by Michael Jackson.

Ali is said to have had a mean streak.  He was a womanizer, too, they say.  That hardly matters, I think.  That was just the person, not the figure.  As Fitzgerald had Gatsby so famously say, that was merely personal.  It took me a very long time to figure out what that meant, but I eventually did. . . and it stuck.

Ali transcended the merely personal.  Anyone whose most famous picture is of him towering above and taunting a man he has just beaten and who becomes known to the world as a champion of peace. . . well, maybe there is hope for all of us.
Posted by cafe selavy at 8:10 AM