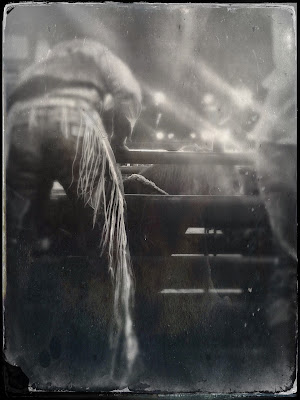 Another night at the rodeo.  Cowboy culture is something else.  I like portions of it--a lot of it, really--and it makes me wish I'd done some things differently.  I don't mean to speak as if I think "the cowboy" is a monolith.  There are nice cowboys and cowboy assholes, but cowboy culture is a real thing.  It's values permeates every behavior.  I like it much better than biker culture, I can say.  There is an underlying danger in each, but cowboys are, on the surface, much more well-mannered.  Being around bikers is like playing with someone's retarded pit bull.  And unlike bikers, cowboys are productive.  They are not afraid of work.

"Hey Bob, we're gonna move Rusty's house to the back of the property this weekend.  Can you come?"

Last night, I interviewed a father and son, two rodeo participants who had driven about a hundred plus miles with their horses to compete in the. . .  can't remember what the event was called.  It involved horses and cows and ropes.  I'll get to that in a minute.

I was a bit anxious to interview them as they were the first cowboys after a string of rodeo queens with whom I was quite comfortable and witty.  They got a kick out of me, I think, in the way that some women do.  I wasn't expecting the same from the fellas.

They walked in looking like actual cowboys: worn boots, jeans, cowboy shirts and cowboy hats.  They were thick, and when we shook hands, I had no doubt about their strength.  I don't whether cowboy life makes you that strong and thick or whether only the strongest men get into it, but without fail, cowboys are physically different from you and I.  One of my cameramen was a young power lifter.

"Jesus Christ," I said, "did you feel that handshake? These guys have never been to a gym in their lives."

The father was the talker.  He had a handsome face and clear blue eyes that were friendly but that also held a warning he wasn't a man to suffer much foolishness.  The son was kind of shy, and he said "yes sir" and "no sir" in a classic way.  Both of them were wide shouldered and broad chested with strong, calloused hands, but the dad was bent in that cowboy way.

"How many bones have you broken?" I asked him.

"Well my body hurts from playing sports on hard courts," I said admitting that I was a sissy, "so I figure a cowboy has to hurt a bit more."

"It takes me a while to get started.  But I'm still good after I put on my braces and bandages.  I think I can still win a few," he offered with a challenging grin.  I wan't going to say different.

I asked them about Cowboy Culture, and what they talked about most was the friends they have made.

"I could call them up for help any time and they'd be right there."

That for me summed it up.  In theory, these guys help each other out.  It is sort of "them" and everybody else.

With my press pass, I had access to everything.  I was where the cowboys were, where the horses shit, where they prepared to ride bulls and broncs.  And I'm going to say one thing--movie cowboys are no exaggeration.  The young men are silent and handsome.  The young women are just as pretty.

I wanted to be a cowboy.

Except for a couple things.  Well, except for about everything else.

The rodeo began with a recognition of men and women who served in the armed forces.  They were the backbone of America, the announcer proclaimed, and they had sacrificed so that we could have freedom of religion, and tonight, they were going to proudly use that freedom in the service of the lord.  Oh, the prayer was rich, all about the final rodeo that inevitably awaits us, about the green pastures and clear waters and abundant herds that God will provide.  And for all those who have served, he said, when they get to the Golden Gates, they will walk right in.  Their union card has already been punched.

And, of course, the rest.

There is one thing I know I don't ever want to be: a rodeo animal.  I especially don't want to be a cow.  Man, they rope 'em and jump 'em and twist their necks until they just about snap, then they tie them up and leave them there wailing while the crowd goes wild.  And the animals they ride, the bulls and the broncs, aren't treated any sweeter.  I kept remembering something from the Bible that said God made animals to serve man's needs.  Or was it desires?

No, man, I don't want to be no rodeo animal.

Today's photo is of the chute just before they released the cowboy and the bronc for an eight second thrillorama ride.  I was standing in my sissy clothes in a serious place, not sure exactly how to move, stepping in horse shit and slipping in mud.  Cowboys looked at me in glances and out of the corner of their eyes, but they didn't stare.  I was hoping that they wouldn't stare.  Like any crowd, there were some wild cards and jokers, and I was hoping not to piss them off.  In my head, I was practicing my best gangsta shit: "Yo, yo, yo, cowboy, what you looking at, motherfucker?"

I'd have been like one of those calves in the steer roping contest.  I could envision myself lying in the mud, the crowd cheering.

I go back tonight for the BIG event.  The top eleven cowboys in the country.  The evening's events will be televised on CBS.  I have interviews before the competition and the press pass behind the scenes once again, though we have been warned to stay out of CBS's way.  No doubt.

I'm worn out with the chemical rush and anxiety of it, the worry of not getting the footage we need, of trying to charm everyone while stressing about everything.  But tonight will be fun.  I'm getting better used to it all.

Now, I will do some yard work.  That's what cowboys do--they work.  There is no shortage of that.  And I'm not kidding when I say I'm hoping there will never be a shortage of cowboys, either.