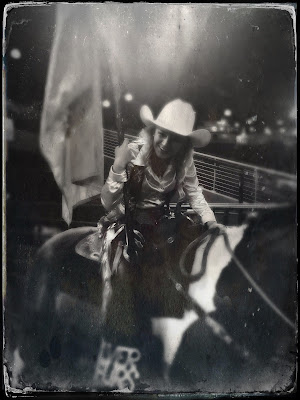 Another night at the rodeo.  Another night not shooting portraits with film cameras.  When you are doing one thing, you can't do another.  Again, it was all video.

And that was the difference.  The night before was a rodeo for regular cowboys.  The fellows last night were athletes.  They watched what they ate and worked out and trained.  They didn't spend their weeks digging postholes or herding cattle.  And as in any other sport, they were young. Championship rodeos ain't no place for old cowboys.

Except in the stands.

Preparing for the interviews, I did some research on The Cowboy Code of Ethics.  I read about a dozen versions, but they boiled down to a few commandments.  It is the stuff we know but forget.  Be brave but not foolish.  Work hard and finish what you start.  Do what has to be done, and take pride in what you do.  Talk less and say more.  Know where to draw the line.  Be courageous and courteous.

It is a a form of chivalry, really.  It was the code of the west.  Pride.  Honesty.  Courage.

There were others I enjoyed, too.  Never, ever shoot a woman.  Never order anything weaker than whiskey, and always fill your glass to the brim.  Don't make a threat without expecting dire consequences.  Complain about the cooking, and you become the cook.  Always help someone in need.

Just because a man wears a hat and rides a horse, though, doesn't make him a cowboy.  Villains look that way, too.  I swear last night one fellow tried to clock me with an elbow.  He was about twice my size, so I gave him a break and let it go.  I figured he had an event coming up, and really, no harm was done.  He'd just have to live with it, that being a villain and not a cowboy.  Right?

Once again, there were prayers and praises for the men and women who served our country in the military.  At one point, the announcer was kibitzing with the rodeo clown and said, "Well, next year, partner, even clowns will have their own bathrooms."

Yup.  It is hard to uphold the commandments no matter how much you want to believe, I guess.  Cowboys and Villains.

But a cowboy finishes what he starts, and I want to be a good little buckaroo, so tomorrow the second part begins.

The sun is up, and the day is hot.  There is plenty of work to be done around the house, too.  I think I will take a walk, though, to clear my head and let all the visions dance through.  In walking, there is clarity.  I will amble and prevail.