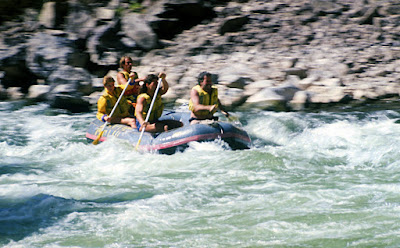 There is something metaphorical about "running big rivers."  This one wasn't metaphorical, though.  It was as literal as it gets.  There were supposed to be six of us in this raft, but after a lazy approach to the rapids in the early morning (after a terrible night of "partying"), we beached the boat to climb the bouldery bank and scout the dangerous rapids that lay ahead.  Our guide had run the rapids, but never as the lead.  A couple weeks before we attempted this part of the river, two guides had been killed, caught in one of those perpetual whirlpools that form under certain conditions.  After we discussed the route we would take through the maze of boulders and rapid water, the guide had us all stand in the river and hold hands as he offered up a pagan prayer to the river.  Two of our party decided that they would rather stay on shore.

This photo was taken by one of the people who had climbed the bank just as we began our run before we hit the real water.  The three of us in the boat had no experience on anything higher than class III which we had run the day before.  We were lucky to stay in the raft.  There were no cell phones or backup, just a wild Peruvian river in the Sacred Valley with a man known only as "Tio" in a truck waiting for us at the end of the run.

When we reached him, post-adrenal and bone chilled, he had a thermos full of cocoa tea and brandy waiting.