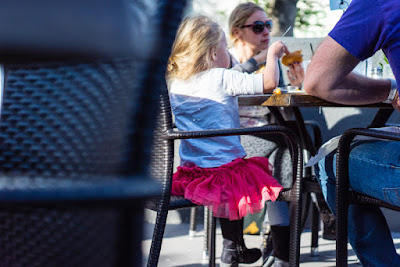 I tried making photographs yesterday in the laconic countryside of the state where I live.  A trip to a distant springs where I went cave diving when I was a silly tadpole so long ago.  My companion was full of childhood memories as well.

The place had shrunk, she said.  It wasn't the same.

The water seemed warmer, too.

The most beautiful moment came while eating lunch. We watched two vultures court.  They were the sweetest things I've ever seen, gentle and sensual and loving, kissing beaks and curling their long necks in double Ss around one another.  They would sit and gaze upon one another and then start again.

There is nothing wrong with vultures.  I've become a fan.

But the day was hot and the sun blistering with no clouds in the sky.  The car thermometer said 101 as we drove along the highway.  I tried stopping the car and photographing old oddities--a trading post sign, a big orange stand--but they looked like poop in review.  I have lost my eye.

The worst part of the day, though, was swimming out to the boil of the spring.  Apparently it has been a very long time since I swam.  It felt eerie and unnatural.  I didn't have this belly last time I swam, and I could feel the fat surrounding me.  I swam out without really going anywhere.  I was just a mess of splashing arms and legs.  I could see the headlines of me drowning in the middle of all those children.

I will have to learn to swim again, I guess.  I never was any good at it, but I used to take the summers off from the gym and run and bike and swim.  I could only swim a few laps at the beginning of the summer, but by the end, I could swim a mile.  I think.  It may have been half a mile.  I'm not trying to brag, for it was slow.  I'm just saying I could swim.

I can't do anything any more.

That's not quite true.  I can sure buy camera gear.  And I've gotten good at paying house repairmen, too.  Yes, I am getting very good at those two things and of going broke in as many ways as possible.  I'm really good at going broke.

Today will offer more opportunities for that, I'm quite certain.  But maybe--just maybe--I will take out the big 8x10 camera and shoot some black and white film and try processing it here in my own home.  Why haven't I done this already, you ask?  Because it is complicated. . . because it is hard.  It would be, however, prudent.  It will cost me much less than buying something new.  Yes, yes. . . I should try.
Posted by cafe selavy at 8:25 AM