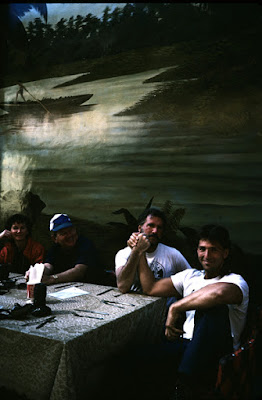 I wasn't sure when I would post to this blog again.  I am dried up right now, without much pleasant to show or say.  Things get harder.  Things get worse.  There is no reason to go on about it.  Everyone has his or her own problems.

I got some news today, though, about which I have thought much.  An old ex-friend, Brando, died this morning in Athens, Greece.  That is what I have heard, anyway, from another of his ex-friends.  The reports are scant.  His organs gave out--heart, liver, lungs.  He was 78.

This is a picture of us in a mountaintop cafe in Peru, 1986.  We were there together for a month (I stayed on alone after he left).  It was during a time when Peru was listed as the most dangerous country for travel in the world by the U.S. Department of State.  Of course we went.  It was cheap.

I have been thinking about Brando since I heard the news.  He taught me many of the bad things I know.  He taught me not to save money, to spend it all on sensual things.  He had huge appetites that he tried to satiate.  In retrospect, he seems small, though at the time, he appeared larger than life.  Things that once seemed grand now appear petty.  He was of a different time, a different era, and he doesn't make sense in the contemporary world.  He was interesting to be with.  He was an architect (though he never actually graduated from college).  He was well-read and knowledgeable about art.  Traveling with him was always a misadventure.

The thing, though, is that in the end, he was selfish.  I was always hindered by conscience which he didn't seem to have in much abundance.  That, however, is what made him more fun.

In the end, he was alone.  It took years, but he eventually alienated everyone who was close to him.  One of the most memorable things he ever told me came in response to a comment I made about what his friends would say if he took up the offer of one of their daughters.

I should have been warned.

Still, tonight I will think of him and remember the times we thought ourselves heroes.

I no longer do.