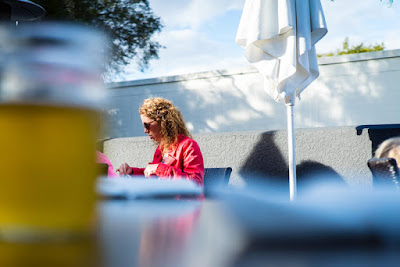 The painter-turned-house-repairman woke me at seven-thirty yesterday.  I was dead asleep.  He wanted to show me some of the repairs he would need to make to the stairs, railing, and landing of the apartment.  They are extensive.  The old repairman that I've used for years was a fraud at twice the price.  That is not fair, perhaps.  He was more like a janitor/repairman than a contractor/repairman.  Still. . . he was a scam.

So the money flows in one direction now.  Like many of you, I may need to take a loan to finish up all the repairs.  Unlike many of you, I am at the end of my earning years.  It is bad to take on more debt at this stage.  I have never saved money having invested in the present so relentlessly, so that seems the only option.  There are more expensive things to come.  When you own something like a house, you can't forget that every square inch of the thing--walls, cupboards, floors, roofs, foundations, bushes, grass, flowers, deck. . . everything--needs continued maintenance.

So I won't be getting the Leica any time soon.

Good.  I have too many cameras as it is.  I am going to a spring today, and I am having difficulty thinking of which camera to take.  Every one of them does something a bit different and is good for making one type of image and not the other.  I can't make decisions.  It is my M.O.

That makes me a good boss, however.  I'm very collaborative.

I spent all day yesterday at the computer working out all the problems I had with the new Adobe CC products.  It was maddening.  Thank god for YouTube.  You can find a video to help you with anything there.  I think that I have everything tuned up now.

You can never forget that computers need constant maintenance, too.

And now it is July.  The afternoon rains have returned.  Thankfully.  They cool things down and settle the nerves a bit.  Last night, I went for sushi just as the monsoon hit.  Traffic creeped as you could not see past the windshield at speeds higher than 20 mph.  When I got to the restaurant, I was able to park next to the door.  I was the only customer.  An hour and a dinner and some sake later, the monsoon had passed.  This morning, the world is a wondrous green.  I am happy that I had my trees trimmed.  Everywhere, the world is shrunken by vegetation.  I live under the high canopy of big trees.  Some money is well-spent.

July is named after Julius Caesar, and as we all know, July is a mad and murderous month.  Rapes and murders occur at their highest rates in the summer months.  You can check out government studies on this or you can read your Faulkner.  The heat drives people mad.  Walk softly, my friends.  Summer is a violent time.  I prefer indolence which I will practice as whole-heartedly as I can.