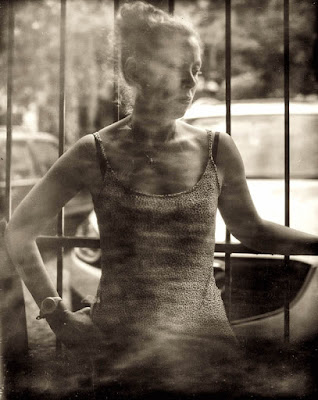 I tried.  I made my start.  I got out the big 8x10 camera and began to work.  There are a lot of locks and slides and levers and buttons on the camera and tripod head, and I turned all the wrong ones over and over flipping and flopping the camera up and down, left and right until I finally got it somewhat level and upright.  I was doing this in the garage and the tenant came down to put in a load of laundry, so I asked her to stand for a picture.  She didn't understand how long it would take.  Neither did I.  I went under the black cloth and began to frame and focus, again moving all the wrong dials and levers.  Five minutes later, I clicked the shutter.

I took the big film plate back to my house and set up a super huge changing tent that I bought a while back and set it on my dining room table.  I took the New 55 R5 monobath developer and heated it in a metal container on the stove to 75 degrees, then I poured it into a tray and set it inside the changing tent.  I hadn't quite cleared the table, so there were a few small items underneath, but I am lazy and thought it would be o.k.  I put the film plate in the tent and zipped it up and then reached my arms through the elastic armholes and opened the plate to extract the film.

There wasn't any.  I had assumed that it was already loaded.

I took my arms out, but as I did, I moved the tent.  Shit!  I prayed I hadn't spilled the tray.

I had, of course.  Liquid chemicals sloshed around inside.

I picked up the tent and took it outside and dumped the chemicals, then got paper towels and began mopping up and cleaning.  The chemicals had somehow gotten into the elastic sleeves.  It took a while.

I left the tent sitting in the sun to dry and went to the garage to get some film.  I couldn't find it, of course.  When I moved everything out of the studio, I just put it all away in boxes as tightly as I could on shelves and in drawers.  Now sweating, I searched in drawers and boxes for about fifteen minutes before I found a box of Ilford film.  It had never been opened.

I took it back to the house and brought the changing tent back inside and then couldn't remember how to tell which side of the film was the emulsion side.  There are notches on the top of the film, but I wasn't sure on which side they should go.  I Googled it.  Ready, steady--I loaded two big pieces of film into the holder and headed back to the garage.  I opened the big double doors and prepared to take a picture of the street.  All I wanted to do, really, was see if I could make an image.  Just as I was setting up, the tenant came in.

I didn't take as long this time.  I snapped one, turned the holder around and snapped a second.

I took a drive.  It was the first time I'd really been into the world in a few days.  It was bright and hot. The traffic was bad.  I tried to chill, but man-oh-man, people are stupid.  I got to the photo store without a fight somehow, though, and went in to buy the chemicals.  Bad traffic, but I still had to get the fixings for the evening dinner.  Fresh Market.  Edamame and garbanzo bean salad.  Fresh, beautiful tuna steak.  A banana bread loaf for the morning.  Some chocolate.  I had everything else.

It was six when I got home.  Time for yoga, I thought.  Yoga first.  But I was not feeling well.  I hadn't for a while.  I ached and felt sore and weak.  Still, Adriane was gentle and waiting.  I lay out my yoga mat in the subdued light of my bedroom and put the laptop on a little stool.  Move a little this way, move a little that.  Twenty-five minutes later, I felt refreshed.  Oh, Adriene.  Three days of yoga down and I was feeling ever so very much better.

I drank some water and poured a glass of wine.  Time to make some developer.  I went to the garage again and got the beakers and funnels and measuring tools.  I looked at the formula and carefully poured.  Ammonia.  Developer.  Fixer.  I poured the mixture into the metal tank and put it on the stovetop.  Heated, I took it back outside and poured the serum into the developing tray and put it inside the tent that I sat on the deck top table.  I zipped the film plate inside the tent, reached in, and put the film into the developing tray.  I rocked it back and forth for a minute, then took my arms out of the sleeves and set the timer.  I picked up my wine and waited.

I was right and wrong.  It worked.  I bit.  The image was very thin.  Underexposed or underdeveloped?  I wasn't sure.  I went online to see if I could find any answers.  Oh.  I hadn't made the formula correctly.  I had forgotten to add water.

So I added water and started again.  I developed the second sheet of film.

It looked the same, only worse.

I put the two sheets of film in the tray to wash, then realized I had no place to dry them.  I took two clips and taped them to a shelf above the washer and clipped them there to drip dry.  It looked fine.

That had only taken an hour.  Jesus.  An hour for two failures.  If you didn't count travel and searching time.

This morning I got up and did the routine.  When I looked above the washing machine, there were no negatives.  They had fallen.  My jerry-rig had not worked.  WTF?  I scanned them anyway just to see.  They were full of dust and scratches and the bottom of them had no image.  There were swirling patterns on the scans from the glass on the scanner, I guess.  I am sure I didn't scan them right.  I imported them into Photoshop and Lightroom and made them viewable.  I didn't try to fix most of it.  They are wrecks.

They are my attempt at 8x10 photography.

I looked out over my new deck this morning.  I had dropped chemicals on it.  It is stained with drops everywhere.  I will have to repaint it.

So that is it.  That is my Ed Ross tribute.  I am going to try it again today and see if I can do better.  I doubt it, but I will try because I have nothing else to do.  Without a car that I can trust, I am stuck to a few miles driving in any direction.  I can't even manage the beach.

What is there to look forward to?  Working out, eating well, drinking less, and yoga with Adriane.  It is a hell of a life.
Posted by cafe selavy at 8:38 AM