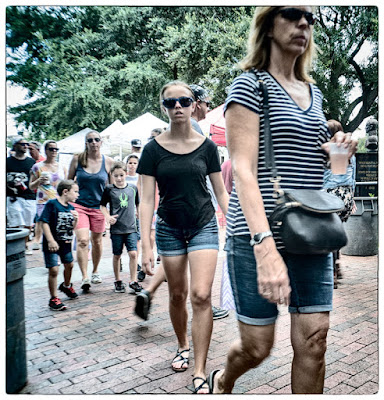 So. . . the day continued as it began.  I didn't leave the house but to go to the gym and grocers.  I didn't eat or drink until seven.  Left alone, that is just the way I am.  It wasn't that I just sat slack jawed.  For the first time in a long time, I was able to sit at the computer and work on images.  I kind of got a rhythm going and didn't want to stop.  But working on pictures can eat up a day and/or a night.  You've worked on a couple things and hours have elapsed.

Maybe tomorrow I'll have the guts to shoot.  As I drove from the gym to get groceries, I kept a photographer's eye open, and I saw things that I should have stopped to photograph.  But it is difficult to stop the car unless that is what you have intended to do all along.  It is dangerous to pull off the side of the road and approach a man with his daughter and her dog and say, "Hey, pal, you mind if I take a few pictures?"

I wrote that last night as I was missing the big Harvest Moon.  Missed it completely.  Wasn't even aware.  Doesn't mean it didn't effect me, though.  I stayed up late and got up early, lunacy-driven, perhaps.  Lunar, lunatic, lunacy.

Damnit, I hate having missed it.  That is not something you can get back.