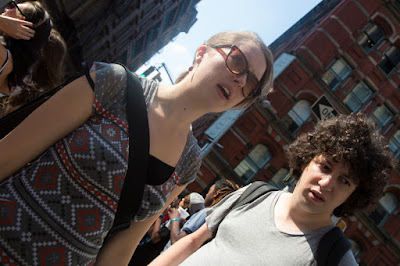 My plan to make pictures this weekend is off to a slumbering start.  After the gym yesterday, there was still plenty of daylight left, but I fooled around the house until it was too late to go.  No matter, I told myself, I'll get a quick and early start tomorrow morning.

I slept in until eight this morning, and now I am lingering over coffee.  So much for quick and early starts.

It is too much pressure.

As the morning rushes away, I wonder what the day will hold.  I need to do some things.  I want to do others.

And then there is making pictures.

I am paralyzed by choices.

My life seems to have been magical in the past.  I had time for everything.  Photographs just happened.  Everything just happened.  There was an embarrassing wealth of time.

Last night at the grocery store, I was standing in the "10 items or less" line that was not moving.  The guy at the front of the line couldn't read signs, I guess, nor could the cashier.  The "10 items or less" sign apparently means unless no one else is in line or if you just choose not to pay attention to it.  Not only did he have far too many items, but he didn't seem to know how to use the debit card machine.  I was in no particular hurry, but the societal breakdown that this evinces galls me much.  There is that, plus the fact that this particular grocery store chain is known for hiring special needs people due to a law suit that they lost a long time ago.  I don't know who is slower, really, the special needs workers or the dirty little hipsters at Whole Foods.  Neither group is really capable of much industry.  The one group socializes while the other group ponders.  They are both slow moving.  One, however, tries to be snotty and the other goes out of their way to be nice.  The end result, however, is the same.

Anyway. . . I had lots of time to stand and observe the crowd.  Behind me was a group of three, a woman and two men.  I heard the woman say,

"People keep telling me that salmon is good for you.  What do you think?  Should we try it?"

On of the men made a kind of groaning sound somewhere between "maybe" and "I don't want to," a sort of sound a cat makes when you hold it close to you in a towel before a bath.

I don't think they tried the salmon.  I turned to look at their shopping cart.  Nope.  They were not salmon eaters.

It is possible to eat really cheaply in the U.S.  You can go to the big box stores and buy cans of food that are almost out of date.  You can eat happy meals and taco Tuesdays at the quick food places.  There are always special coupons for the kind of foods I don't buy.

Why would you eat salmon?

O.K.  That was a two part entry.  But they are obscurely connected in that I went to the grocery store instead of going to make pictures.  I got a vignette rather than a photograph.

But I salvaged something.

The sky is cloudy.  It will be very hot and humid later.  I should pick a camera and go.
Posted by cafe selavy at 9:21 AM