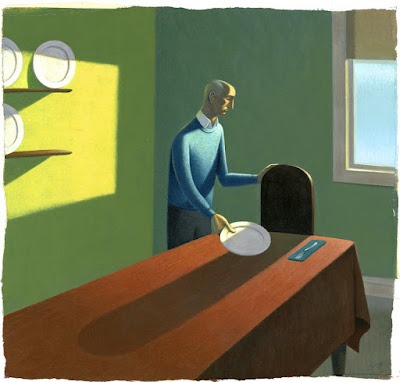 This is an illustration for an article on loneliness that I read in the N.Y. Times yesterday.  It is like a cross between an Edward Hopper and a Rockwell Kent.  The illustrator's name is Jon Krause.  I Googled him and was not disappointed.  He is my new favorite illustrator.  Except maybe for Amy Crehore.  I would like to own works by both.

Is being an illustrator less than being an artist?  Krause's website proclaims him both.  Rockwell Kent was both, but I think he was a better illustrator than artist.  One term implies more commerce, the other more serious intent.

I'll think on that.

I spoke with a man yesterday who has owned or has been a partner in several art galleries in L.A.  He saw two of my old large Polaroid analog/digital images and wants to introduce me to some current galleries.  We talked about the business of art for some time, me saying that I never had time for it but now that I don't have a studio and am not working at it night and day, I do, and that I should begin to send out some work.  My ideas about it seemed all wrong to him.  Maybe not wrong, but at least unconventional.  I am in many ways always my own biggest problem.  I just want to make pictures.  I would like to be able to afford to do it, but the commerce part is not my forte.  There is much work to be done and much disappointment to experience if I want to travel that mountain.  I am like too many others.  I just want somebody to look, say "Wow!", and make us both some money.

That ain't how it works.

He suggested some other ventures.

"Have you ever submitted your work to a competition?"

I have a dirty little secret.  I did, once.  It was an awful, cheap, and cheesy feeling.  I can't help but believe that the winners are known beforehand.  It is a rigged game, I think.

That is what all losers say.

Maybe I should try wedding photography.

Roof and cat are still problems.  First one thing, I guess, then the other.
Posted by cafe selavy at 7:55 AM