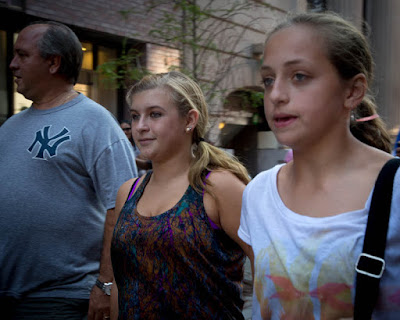 I watched an old Anthony Bourdain show last night.  He was in Chicago.  What a douche.  The whole thing was about a couple crummy bars and some hotdog stands.  Still, I watch it when I'm eating dinner and don't want to think.

In one of the dive bars, however, he sat with a fellow who blogs about the patrons of the bar.  I think. I wasn't certain what I heard because. . . I put Bourdain on so that I don't have to pay attention.  It doesn't matter, though.  What a great idea.  That is what I want to do.  Not a bar, but someplace.  Maybe a hipster coffee shop.  Just sit there in the mornings with a cup of hipster coffee and tell stories about the people who are there (or who are not).  It would be a fictional place so that I would feel free to make things up.

That is what I will do when I don't have to work any more.  Life will be fun then (if I have enough money).

I've been shooting film, but not much of it.  I am working like a madman getting things in order before my NYC trip.  It is a short one, but if it doesn't rain, it will be visual.  Maybe I will shoot some b&w film there.  It is autumn now.  The pictures should be grey.

O.K.  No segue.  I keep wondering if it is true.  Do men really think of having sex with women?  Do they really talk about it to one another?

Don't worry.  I'm going to investigate and get to the bottom of this.  I'll let you know what I find.
Posted by cafe selavy at 8:58 AM