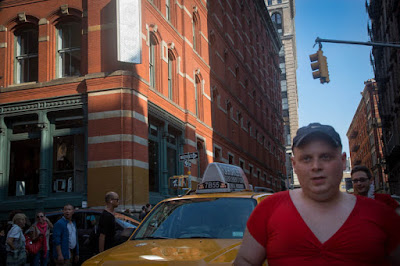 Last night, the weather broke.  Eating al fresco on the deck was easy.  It was almost cool.

My mother surprises me as mothers will their children.  We tend to think we know them, but we don't.  They spend their lives keeping things from us.  So last night, we were talking about Trump's tape.  My mother wasn't shocked.

"If you worked in a big industry (she worked for a defense contractor), you heard that sort of thing all the time.  My friend, Barbara, was sitting at her desk one day when the boss came over and put her hand on his penis and said, 'How do you like that big banana?'  She was a married woman, but there was nothing she could do.  She would have lost her job.  Men stuck up for men."

She sat still for a minute and then said, "Men are pigs."

My mother is never nostalgic about the past.

But that's the deal, ain't it?  Trump shines a spotlight on privilege and power.  He is textbook.  You either accept it or you don't, but from now on, there will be no ignoring it.

It is awful.  He is the perfect fall guy for Hillary Clinton.

I am going to NYC on Thursday.  The trip has long been planned, though I was not sure that it would ever come off.  What a week to go, though.  I'll never get done what I must do.  I can't even remember it all.  I have a doomsday attitude about things that are fun.  Always have.  When I was a kid, I used to worry myself sick--literally--before we would go on family vacations.  I have never overcome it.