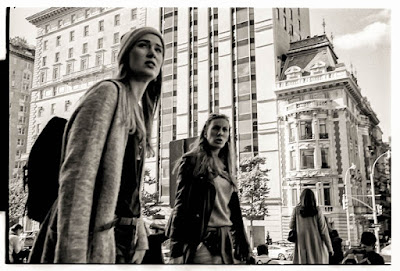 It is dark just before sunrise.  I can feel the tremors of the train and hear the whistle in the distance.  I have heard this whistle all my life.  It is a comfort, a reminder of youth, a continuity with the ages.  I am my father now, I guess, sitting with a cup of coffee and all the worries that come in time.  Will kids always hear the train whistle in the early morning darkness, I wonder, as their consciousnesses begin to rise from slumber then drop again back into the depths of comforting sleep?  Will it remind them, too, of something as they age?

Here it is a seasonal sound, something that happens when the air become heavier, when the prevailing winds switch to the north and to the west.  You do not hear it in the summer, do not feel it, but in the autumn and in the winter, the sound carries seemingly forever.  We lived many, many miles from any train tracks when I was young, but during the holidays, I would wake at night to the locomotive's eerie sound.  Later, in my teens, after my parents had divorced, I lived with my father in a cracker box house with the train tracks running just behind.  If the train didn't come on time, I would wake.  The sound of the train must have been incorporated into my dreams.

I wouldn't have thought of it had I not been about to write here in the early morning as the train rumbled in the distance.

The roofer comes at eight this morning to take the giant tarp out of the attic where it was supposed to catch all the debris that was inevitable from the roofing job.  Outside, my newly painted house is scarred with tar streaks from the falling shingles.  The jasmine is trampled and worn.  Sprinklers have been broken.

I signed a contract that said the roofing company would not be responsible.  Live and learn.

It is Halloween.  My friend carved a Jack-o-lantern which sits on the front steps.  She hung a giant electric light spider web on the door.  She has been baking cookies and cupcakes for work.  I am a holiday recipient.

I like today's picture for unknown reasons.  The women in the foreground are blurry, but I like that feature.  The photo would be worse were they in focus.

I woke too early this morning, I guess, and will need to make another pot of coffee.  Maybe I'll sneak a couple of the cookies that are wrapped up and ready for others.  I am at the tail end of my sickness, I hope, still coughing and blowing.  I will baby myself a few more days.  I haven't been to the gym in three weeks.  I don't miss it.  I think I am finally ready to let that part of my macho psychosis alone.  I have come to realize that my whole life, I have pushed too hard, driven by some need to be. . . I don't know. . . something.  I'm done validating myself.  I want to relax and let someone else take on the bad guys.  I'm hanging up my cape.  Even Batman has to retire someday.
Posted by cafe selavy at 7:39 AM