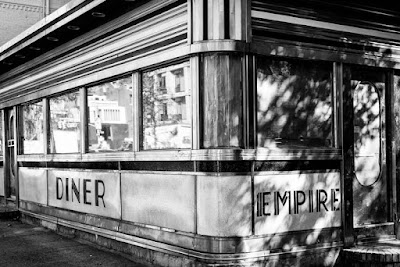 I enhanced my life experience yesterday.  I hope.  I did it with a purchase.  They say that "things" don't make you happier, that experiences do.  But I think my purchase will give me new experiences.

I bought a Vespa.  Not a new one.  It is 2003 with 6,000 miles on it.  And I only paid $899.  I rode it all Halloween night.  It is a pip.  I had few trick or treaters early which is when the young kids come, so Ili and I took a ride to see if we could spot any.  Driving through the winding, oak-lined neighborhood streets at fifteen and twenty miles per hour was thrilling.  At thirty, you realize that you could hurt yourself with a fall.  Forty makes you want to poop.  But I won't need to go fast much.  My part of town is what they made Vespas for.  The four or five of the best neighborhoods (with their little cafes and restaurants and bars) are within striking distance from my home without the need to do more than cross a road of more than two lanes.  I've wanted one for years.  Now I wonder at the idiocy that kept me from buying one before.

I told Ili yesterday morning that I wanted one, so I looked on Craigslist.  The first one to pop up was located only three miles or so from my home.  It was the one I bought.  I texted the owner and went over after work.  He was a nice fellow who said he rode the scooter every day.  I was nervous when I climbed on to take it for a test spin because I haven't driven motorcycles for more than a collective half hour in my life.  I was pretty sure I would drop the thing in front of him.  I didn't.  But I worried, too, about the age of the scooter.  I don't know anything about them.  It started.  It ran.  That was it.  I gave him the money and he gave me the title.  All I knew was how to start it.  Lights, turn signals, where to put the gas and oil--all of those things--were still a mystery to me.  I didn't even get a bill of sale.  I am like a kid.  With a handshake, I was off, Ili following me in my car.

Jesus it was fun.

Back home, I invited Ili to get on the back.  The scooter has a backrest.  It is the bigger, more powerful Vespa, and it was made for two.  We drove around the neighborhood in the last light, around the lake where the breeze was noticeable.  We cruised but saw no trick or treaters.  We decided to go home.  Then we decided we should drive up to the Boulevard and get a takeout hamburger.  Home with burgers and fries, we wanted to watch something apropos of Halloween on television.  I asked her if she had ever seen "The Addams Family."  She hadn't, so I pulled it up on Hulu.  We watched two squirrelly episodes and decided to take another ride on the scooter.  We drove to the little hipster bar, something we never do, just for fun.  We took back streets almost all the way, then we drove on the main road which is not much of a main road with a speed limit of thirty-five.  Still, it felt scary.  The hipsters were having their usual Monday night market with the impossible parking, cars lining the little neighborhood streets for a mile.  I pulled right up into the parking lot and cut the engine.  There was a little jazz trio playing, an upright bass, a guitar, and a violin.  The air was cool and sweet as they say.  Oh--I forgot to mention--we were in our pajamas.  Coolio, we were.  A woman from one of the food stalls asked us if we wanted some free food and gave us little cups of something Mexican.  Of course she did.  Who wouldn't.  We were riding around on Halloween night in our pajamas on a Vespa.

When we got home, the bigger kids were out, more trickers than treaters.  And, per usual, the kids from the neighborhood where my old studio was located had migrated over the tracks.  Literally.  We sat outside with drinks and handed out candy.  They took it all.  But the older kids weren't cute, and we decided we would take another ride.

When bedtime rolled around, Ili said she was still jazzed up.  Me too.  I thought of all the places we would go that we hadn't gone before, noodle shops and microbreweries and hipster dives.  I would take my camera.  I would take my notebook.  We would have adventures.

I hope.  Stay tuned.  Perhaps there will be a little book of Vespa Vignettes.  There is much, now, to be done.
Posted by cafe selavy at 9:10 AM