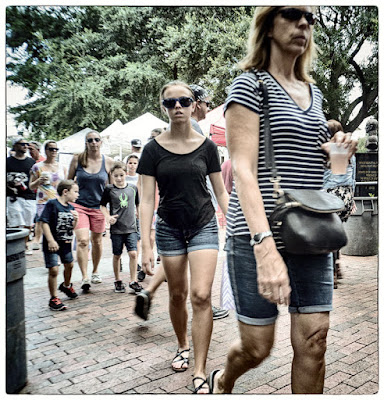 Getting back to normal isn't always easy.  People here have been traumatized even though we had the best of luck.  The storm was scary, sure, but the coverage--especially The Weather Channel--was horrifying, hour after hour of worst case scenarios topped by the Governor of the state repeating over and over, "This storm can KILL YOU!"

He's a genetic liar, of course, telling us that there is NO gas shortage in the state.  The gas stations have been without gas for days.  That bald-headed mutagen is a millimeter short of Trump.

Still counting our blessings, however, we began to set things back in order, clearing debris, piles of moss and stacks of fallen limbs, and bringing out all the pots and glass table tops we had stored in the garage.

And then it was time to go take a look at Ili's place in a town harder hit by the storm.  Being closer to the coast, the winds were quite a bit stronger.  When we got there, though, it was after noon, and we were hungry.  Ili had a grand idea that we should go downtown and eat.  But her own hometown was till in shock, many stores and restaurants still closed, streets empty of car or foot traffic.  No matter.  We went to a favorite little German deli where we got sandwiches and beers.  It wasn't until I had paid, though, while the sandwiches were being prepared, that I thought to ask the question.

"Did you lose power yesterday?"

"Yea.  It didn't come back on until this morning."

Taking the sandwiches outside to Ili, I told her the good news.

"I guess we should have asked that first," she said.

We smelled the sandwiches.  Then Ili got up and went inside.  When she came back she said, "They took all the food to a refrigerated storehouse that had generators yesterday," she said.

I looked at her.  She looked at me.  We nibbled the sandwiches.

An hour later back at her place, my stomach was gurgling.

"You know, maybe the food that was getting served hot might have been better than cold cuts.  I think I need a drink."

The rest of the day passed in burpy, gassy horror.  My stomach was a sewer.

How could I be so stupid, you ask?  Well, we're still not thinking right.  We are zombies wanting to return to normal.

Late that afternoon, we sat with Campari's on the deck watching the tree guys who had cut my trees and saved my house work on a giant tree across the street.  Campari is a type of bitters, and it really did help to settle our bellies.

Still, we didn't have an appetite for dinner.

The past couple days really have been like a painting by Brueghel.  While the storm rages, there are baseball games and football games and Trump.  Life is always where you are.

"Just grab 'em by the pussy!"  This is the shocking thing to me.  I've been arguing about this since I heard it.  You can't do it, I say.  It is impossible.  But I am being constantly refuted.  Apparently this goes on in bars at night where middle-aged people go to drink and be sleazy.  I'm told you can't go to the restroom without being grabbed.  "Really?" I say in true shock and amazement?  I really don't know this as I do not go out into the world after dark.  I am stunned that this is what I'm missing.

Still, I maintain that it is not possible.

The moral outrage over Trump's statements, though, makes me giggle.  Really?  Only NOW are some people thinking that maybe he is not presidential material?  Like he was O.K. before?  I thought that this was the VERY REASON that his people were voting for him.  Bring back the good old days, right?  America the way it used to be?

I don't know.  I live in a bubble.  I'm happy that I didn't have to go to the hospital last night, that I could survive the warm cold cuts and sleep in a house that had not been damaged or destroyed.  I will cook for my mother tonight, and we will speak again of our good fortunes as we work our way back to the normal outrages that are the hallmark of the world in which we live.
Posted by cafe selavy at 8:09 AM