A Day of Hope 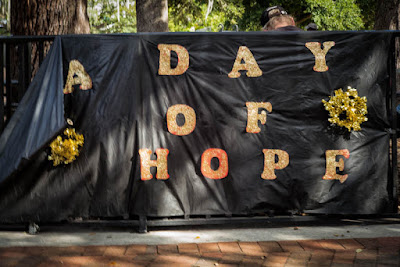 My vacation started out fine.  Perfectly, really.  I got up, read the news, wrote my piece, then made some of my especially delicious porridge for Ili and me. The house was clean and the world was beautiful when I headed out for the gym.  I had a wonderful workout, then, after a shower, Ili made us some tasty egg, cheese, and sausage blend in a cast iron skillet in the oven.  It was noon.  We were ready for fun.

"You should take a picture of that.  We'll do something with it." 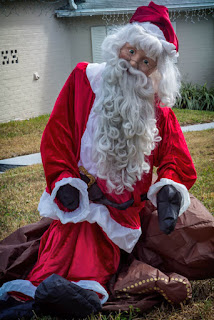 I took her down alleyways behind warehouses and past the hospital, then onto Antique Row.  I was headed to a camera store to see if they had the strap I wanted.

When we walked in, the fellow behind the counter remarked on the scooter.  Yes, yes, I said, so much fun.  We are a striking couple on it like something out of a movie.  I'm sure of it.

I got the strap and off we went, cruising more neighborhoods on our way to a world-class photo gallery.  I go there even though they did not want to exhibit my photos.  The gallery, though, had not changed the exhibit since our last visit, so we took some pictures of ephemeral things and headed for a little neighborhood bordering the big city downtown.  At the central park, we came across a group of tables piled high with blankets and clothes.  It was a give-away for the poor.  People milled about looking for clothing for themselves and for their children.  A heart couldn't help but sink.

There was a Santa Clause for the children.  He wasn't busy.  It was about 85 degrees, and he told me he was soaking inside the suit.  I thought of the Deflated Santa as I took his picture. 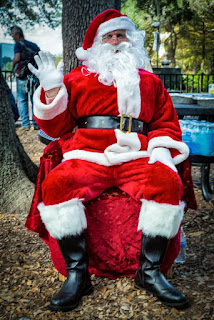 There is a sadness in the world that is terrible, but that is for another day.  I can not write about it here and now.

And so Ili and I, making our way to the scooter, wondered what we would do.  Two things came up.  A beer at a small cafe where there was a good crowd or fresh juice from a little hipster place across town.

We opted for health.

And this is where the story goes sideways.

"I want something that will be cleansing," I said.  "I want to be purified.  I'll get us seats at the bar.  You go ahead and order."

She came back with something green in a mason jar.

"It has cucumber juice and aloe," she said.  She tasted it and made a face.  "You may not like it." 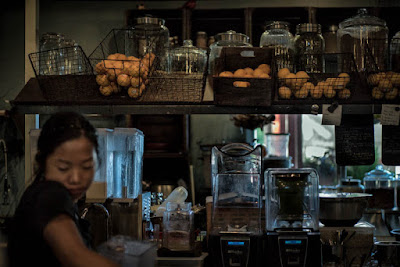 I tasted the drink.  Yup.  It was awful.  But what the hell, I thought.  Ili felt bad as her drink was sweet, so she said we could share.  I had some of hers after big, big sips of mine.  Then two shots of wheat grass juice with turmeric showed up, and I hit that back with a quick bang.

"Wow!  You can really tasted the turmeric."

It burned going down.

Back at the house, I was feeling tired and we decided a nap would be the thing, and so we closed the blinds, put on some music, and lay side by side.  But something wasn't right.  My stomach was beginning to burn and rumble.  Really burn.  I mean like hot knives.  Really hot and really sharp.

I was up.  I won't describe what happened for the next few hours, but my body wanted to rid itself of what I had in me very, very badly.  Violently.  I thought, perhaps, that I had been poisoned, but Ili was not feeling the same way and we had shared both drinks.  Perhaps it was an allergic reaction?  There was a point where I was certain I needed a hospital.  After a couple hours, though, the searing pain became a simple cramping and roiling.  There was pain, but it seemed to be subsiding.  There was nothing left in my digestive system, I was sure, but trace amounts of whatever thing was trying to kill me.

I stayed in bed for the rest of the day and into the night.  Ili went to the grocery store for soup and popsicles.  The crisis had passed, the critical reduced to the merely horrible.

I am done with juices.  Jesus, what was I thinking?  I was trusting dirty little nine year olds to make a drink that would purify me.  What do they know about such things?  And I am done with the whole raw food thing, too.  Who knows what sort of bacteria was living in the recesses of whatever I drank?  Nope.  I will only eat out of cans from now on, shit I've heated to 212 degrees.  I'll overcook everything.  Actually, I don't think I will eat at all.  I'm living on coffee and toast from this point on.  Nobody dies from coffee.  Nobody gets sick from bread.  I'll burn my meat and cook my potatoes.  I'm going to eat a strict American diet.  I'll leave the other shit to Anthony Bourdain.

And so. . . that is the way my vacation began--sadness then sickness.  Perhaps I was simply having a guilty reaction to the day, me driving around on a Vespa with a new Leica on a end of the year vacation, crying about the wasting of my life while other people not miles from me are trying to just get by.

As I think about it, I am sure that is it in one way or another.  Hell, I am beginning to think it was all self-inflicted, some Freudian shame thing.

Whatever it was, I'm sure I deserved it.  And now I'm back on the straight and narrow.  Coffee, overcooked foods, and a few digestifs.

But I have another plan cooking, too, and you will hear about it sometime hence.  There are too many people who are suffering needlessly from too little money, and Trumpville is a place where they are going to blame the victim.  Like I say, though, I have some ideas.  Some really good ideas.