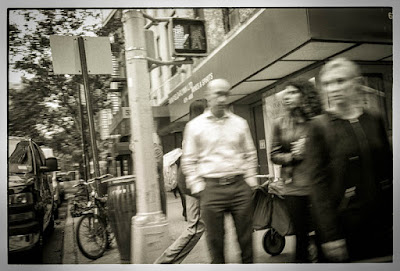 I'm cash-strapped.  I know it.  The bank keeps sending me notices to that effect.  It is at such times as these that great strategery is required, for without it, I can either a) become bankrupt or b) miss out on the best deal I will ever get on a Leica digital camera.  Actually, there are at least two deals.  One is an old M9 which is one of the few digital cameras that refuses to lose value even though it is like ten years old.  The other is a brand new M262.  I can ruin myself and get one or I can kick myself for losing out.

I think that is what kept me awake last night.  That and the mess that is what I call my life.  You see. . . I want things.  I want my studio back terribly.  I want to make pictures again.  I miss what I teasingly referred to as my creative life.

Buying the Leicas, though, won't bring that back.

I used to travel.  I used to do a lot of things.

I used to be young.

Oh. . . that is what keeps me awake at night in all likelihood.  Last night everything hurt no matter which way I turned or rolled.  There was that, and then there were the thoughts that came with the darkness.  Somehow I blame myself.  It is all my fault.

And then I imagined myself doing the things that made me wonderful in the past.  Doing all those things, though, takes a lot of time.  Where did it all go?  I used to have time for everything, it seems.

There in the dark, I pictured myself beautiful again, riding my Vespa with an enviable little leather carry bag.  In eternal time, I pulled up to a cafe and order coffee.  From the bag, I took a small, black notebook (Moleskine) and my little film Leica.  I crossed my legs (like I used to be able to do) and placed my Mont Blanc Meisterstuck Rollerball pen at the ready.

And there I was--a J. Peterman ad.

Yea, I know. . . I'm going through some sort of identity crisis.

But. . . yesterday, I did color code my double sided 4x5 film holders and load them with black and white and color films in the huge changing tent I have.  Twenty of them.  And later, long after the Christmas Parade was finished and there was no danger that I would have to confront myself with that, I DID put the film holders in a bag and bungee corded my Black Cat Liberator in the little straw basket I have attached to the Vespa and took off looking for. . . something/anything.  I felt like a Photography 1 student, really, with no confidence.  But the ride was nice as I cut through the late afternoon air that was thick and rich and cooling.  And then, on the backside of a warehouse sort of building, I came upon a couple guys.  One was doing tricks on a skateboard and the other was videoing him.  They looked cool, so I stopped the scooter and asked them if I could make some portraits.  They were intrigued by the camera and said yes.  The guy with the video wanted to know all about the Liberator, so I showed him how it worked and let him take a photo of the skater with it.  I shot one of the last Fuji Instant Film images I have just to make sure I had all the controls dialed in, and then I made some film pics that I will process today.  I left with four pictures (I hope).  But as I rode away, I realized how hard it will be to make good pictures with this camera.  It will take a whole lot of practice before I am not thinking about the process and can begin thinking about the subject.  I wasn't really seeing them as much as I was making sure I did everything else right.

I loved the interaction, though.  The cat with the video camera works for a skate shop.  He told me that I should go over there, that they had a park in the back of the store with all kinds of weird decorations.  I said that maybe I should try to do some skater portraits over there, and he thought everyone would be down with that, so. . . perhaps a small series begins.  It gives me ideas.

But first, I must become better with the camera.  All my cameras.  And in the dark last night, I determined that come hell or high water, I would go out with a camera on the Vespa every day and take pictures, whether it is with the film Leica or the digital Canon or the Hasselblad or Rollei medium format cameras or something else.  Every day.  You do best what you do most, I always say.

I had planned on telling you about my evening, but this post has become too long and thematically, it wouldn't fit.  And so, here with the early morning light, I will leave you and go back to bed to try to regain my youth.

Let's see how that works out.
Posted by cafe selavy at 7:57 AM