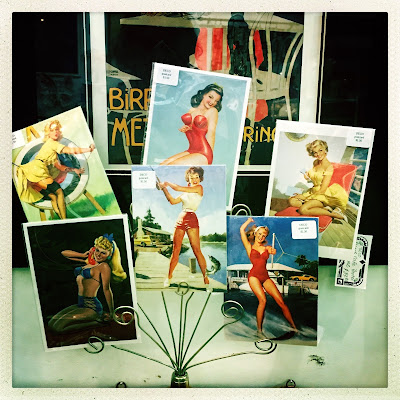 Where was I?  A pretty little day.  Oh, yea, we had picked up my print from the art store.  Man, something weird was happening there.  They were stacked thirty deep at the checkout.  Fortunately for me, I'd already paid, so we would have been out the door quickly if the framer wasn't bent on telling me all about his Christmas Cruise with his family in the Western Caribbean.  Why?  Ten thousand dollars, he said.  Clogged toilets.  Bad service.  They couldn't even get into the port at Jamaica.  Those are the things I think of when somebody says, "I'm going on a cruise," so I was waiting for the punch line.  But nope.

On a back street, we pulled into a little mystic shop that sold all the necessities--crystals and magical gems and mortars and pestles, Ouija boards and packs of tarot cards. . . etc.  We'd never been before, so it was research for future reference.  But stepping out of the shop, we saw a sign for Pho and decided to take a look (we'll go back), and then we saw a sign for Boba.  Oh, Ili said, let's get some Boba.  Sure I said, but I hadn't any idea what we were getting.

"Which one is most popular?" I asked.

"Taro," replied the pretty Asian girl behind the counter.  "You want to try a sample?"

Right away, I was hooked.

Bobas in hand, we headed to the little hipster mall where I could get some stretchy headband things of the kind I'd lost, and Ili wanted to stop in the antique shop next door.  I saw the postcards in the picture above and Ili said, "Those look like something for your friend."  So I snapped a phone pic and sent it right away.  I thought to buy them for him, but there are so many other things I wanted.  One was a cleaned and repaired Smith-Corona Sterling typewriter.  It was cheap.  The thing was, could I get ink ribbons for it.  The lady at the counter assured me I could and wrote down the name of the place that sold them.  O.K. I said, let me call and see, and I'll be back.

The sun was shining and everything was beautiful.

It was getting to be late afternoon and we needed to run to the frame shop to take back the frames Ili had gotten me for Christmas. They were very expensive and really crazy.  I wanted them, but there were two other pairs that I wanted more, so we went in to make the exchange.  They were as beautiful as I remembered and Ili found a pair she wanted, too.

Then it was off to the hardware store for some locally grown honey and some Seafood spray paint for the scooter repair.

Then we had a great idea.  There is a new little den of iniquity, a health food store, Ili said, that served Kava tea.  Let's go see.

Jesus.  It looked like an opium den.  They sold all sorts of herbs and teas in plastic bags up front, homemade looking things, and in the back was a tea house, sort of, with black lights and crazy paint, couches and bars and people seemingly on the nod.  A woman of unrecognizable origins worked behind the bar.  She was the owner we would discover.  She made the teas, strange concoctions that looked like dirt and water with sprigs and sticks in them.  Across the room, people were sitting in chairs with paper cups of teas beside them.  What the hell, I thought.

"It is a little controversial," she said.  "It is an herb used in some parts of the world to help people get over addictions.  I'd recommend you read about it before you try it."

I recommend that you do, too.  Q tells me it is all the rage in salons across San Francisco.  Surely it will be illegal soon.

It was a strange end to a beautiful day.  I'm a straight kid, I'll tell you.  I love the daylight.  I love lucidity.  This stuff is for people of another kind.  I like going to Zombieland, you know, but I always love coming home.
Posted by cafe selavy at 8:21 AM