Doing Stuff in the New Year 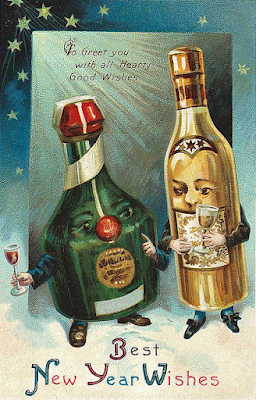 For all of you using the Gregorian calendar, Happy New Year.  It will be a year of reform, I think.  Just you wait and see.

But no bad tidings.  I must be resolute.  Here is my resolution--I must begin making pictures again.  I went all of 2016 without doing that.

Harder yet, I will lose the weight I've put on at year's end.  Shall I try a dry January?  I have been told it is a bad idea to commit to that.

All our desires to lose weight, to be skinny and pretty, I read this morning, are just other people desiring to control us.  That is what Naomi Wolf says.

But what if I just want to be healthy?  Healthy is pretty, right?  The healthy people of the world don't look like overstuffed sausages, do they?

I think Naomi Wolf is just a mouthpiece for the junk food industry.  She is being paid off by the Ding-Dong people, or maybe the Cracker Barrel.

Speaking of mouthpieces, I hope you all watched Pit Bull's Rockin' New Year's Eve show last night.  Coolio, man, was the shits.  Or was it Mariah Carrie?  Or Jennifer Lopez?  Shit. . . I don't know.  New Year's Eve is where old performers go to die unnatural deaths, I think.

I've just had to ask the names of all those people.  Every one of them.  We flipped through some channels last night before bed (I didn't make midnight), and did see these people, and again, I was reminded how outside the normal experience I am.  I didn't know anything that was going on.  There was a Spice Girl, I was told, but I am only vaguely aware that that was a girl band of some sort.

Maybe this year I should get a Twitter account.  That way, I can follow the President.  Actually, president.  The word, in truth, is not supposed to be capitalized.

These are the sort of things I do know.

The sun is bright and the air is warming.  I must do things.  That is my resolution--to do things.  Less thinking, less eating and drinking, and more doing.

We'll see how that works out.