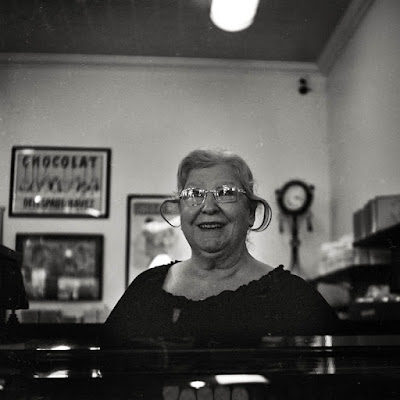 This woman runs a chocolate factory.  We met her on the day that cold, clear day we went to the salt marsh.  We stopped in the little town that borders the wetland to get a treat.  I had my Rollieflex with me, and Ili, much to my surprise, asked if I could take her picture.  I didn't have a lot of hope that the image would come out as it was pretty dim in the store.  I developed the film at home the next day and scanned it, and with a little computer magic, I was able to pull an image out of the ether.  She was a very friendly sort, and she made excellent candies.  It's not a good photograph at all, just a snapshot using an old film camera, but it is a bit of a nice memory.  And for the most part, that is what cameras are sold for--to capture memories.

That seems to be forgotten, really.  Everyone talks about the technical aspects of this camera or that.  By and large, the "best" cameras have gotten hideously difficult to use with their pages of menus.  Editing programs, too.  All those old photographs we most love, though, were shot with simple cameras, the film cooked up with a chemical most likely to yield an image.  Now people use expensive software to post-produce images that look just like that.

We make things so difficult.

That is why, by and large, the best photos are being taken with phone cameras.  People show me enviable pictures they have taken all the time on the screen of their phone.  These are the new best picture documentation of what life is like today.  Hate selfies?  Too bad.  It is one of the hallmarks of the era.  I miss the mirror pictures, of course, but the selfie camera has its own charms.  Tired of the "look at me" generation?  Nobody cares.  Put it in a caption and maybe someone will pay attention.  Otherwise you are just yelling "look at me" without providing something we can actually look at.

But I might be wrong again.  Trump is doing well with tweets.  Seems like he's winning every battle.  Selfies did Anthony's Weener no good.  Words are more slippery than images.  Trump is winning everything.  Petulance has an attractive side apparently.  My hillbilly relatives are all for Trump.

"Well, it's got to be better than what we had before."

"Really.  He's going to make you pay for The Wall."

I was stunned.  They knew it was all bullshit?  What do they like about him?

It is not what they like about him.  It is about how much they hate the other side, the one that tells them that they are stupid, that being stupid is bad, that they need to listen.  They would rather talk, and Trump does that for them.

Who did Streep speak for?  She hurts for the underclass?  The underprivileged?

"My sister's husband's sister's got this retarded boy.  Poor thing, he's a mess.  He's got to be watched all the time.  She's got her hands full, God love her.  She loves that boy, that's for sure."

They accept many, many "odd" things in their lives.  It doesn't mean that they normalize them.  They still think that some things are odd.

"There's this old man down in the holler.  He likes to put on women's dresses. . . ."  They laugh.  "He used to be a damn good plumber.  If I have any trouble, he comes down and fixes it for me.  I give him a little something to help him out.  We have him down for dinner sometimes.  He's alright.  But goddamn, he's got some pretty dresses.  He's a crazy old fucker."  Everybody laughs and shakes their head.  "Now they want to give him his own bathroom!  Imagine that.  At least he'll be able to keep it running."  More laughter.

There's a lot of laughter about life's weirdness.  There's murders and robberies and drug addictions and jail.  There are plenty of deaths.  There is a lot of sadness.  What can you do?  They take it and get on with things.

I don't think as they do.  I'm privileged and not nearly as tough.  My mom is like that.  "What are you going to do?" she'll ask me.  It is not a question.  It's a statement.  What she means is that you go on.

Trump's appeal is that he is not one of the whiners.  He speaks the language of those who just go on.

We must go on.