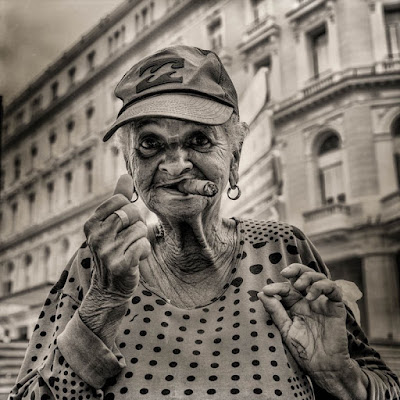 Yassa asked us where we were from.

"I studied English at the University," he said.  "Also literature and French."

He asked us what we thought of Trump.

But Yassa, like most people we talked to, was hopeful. Trump, they say, is a businessman.  It was the most surprising thing about Cuba, I thought, that people were for the big capitalist, but people had had enough of socialism, I guess.   I didn't want to talk politics however.  Yassar lived in the ruins of. . . of what?  I didn't know enough to say if it was Fidel's failed system or the American embargo.  I wasn't here to opine.  I just wanted to listen.

He trailed off.  He was needed at another table.  Ili and I sat back and enjoyed our drinks looking out over the street in front of us.  In a minute, however, Yassar was back.

"I am an attorney," he said.  "Was.  I spent seven years as a maritime lawyer working with the big shipping companies.  I made eighty pesos a month, lived with my mother, couldn't afford to get married.  I got a job on a cruise ship as a bartender and a tour guide.  I made more money in a couple nights than I could make all month working as an attorney, so I quit.  Now. . . I work here.  I got married, have my own house.  My wife is expecting our first baby."

I calculated that eighty pesos a month was about $1,000 a year.  That was the same as it was when I was in Cuba in 1999.  There were doctors and lawyers and professors at the conference where I presented, and that is what they all made.  Now. . . Raoul had opened up the country to private business which made things. . . well, a bit more inequitable, really.  There was more of the haves and have nots now.  You had to hustle to get ahead.

I laughed without thinking and said, "Of course.  They are maritime towns."  He must have worked with the French shipping lines, I thought, and they had filled his head with tales.

"And I want to go to Carnivale in Brazil.  Excuse me," he said to Ili, "but the women there are so. . . ."  He made an scooping curve with his hand.  "And I would like to see Buenes Aires.  I want to go to America and see a Clippers game and a football game and the Texas Rangers."

He was a big guy, about six-three, and he was built like an athlete.  It was obvious that he had played something.  Ili was enamored.

I thought about what he was saying, though.  He was thirty-seven, had just bought a house, had a wife, and was expecting a baby.  I doubted that he was going to be able to accomplish all of that.  I doubted, really, that he would get to do any of it.

In between things, Yassa waited tables, brought us our meals, and kibitzed with people walking by in the street.  He was confident and definitely an alpha male.  He held forth on more topics at length, but eventually our meal was finished and our second drinks empty, and we were exhausted.  The Cafe California, though, served breakfast, and we told him we would be back.

Ili and I wandered the streets back to the apartment.  The air was soft and warm, the streets busy but quiet.  Back at the apartment, we opened the window and stood on the balcony overlooking the ocean with one last drink.

Then we slept for eleven and a half hours. 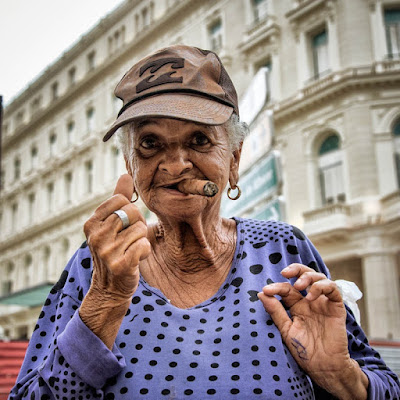 (A note: as I work through the Cuba images, I try to develop them in a representative style.  Some of them appeal to me in black and white, others in color, but sometimes I can't tell.  The colors of Cuba pop, but sometimes the monotone images are moodier and say something else.  And so. . . the second image.  You decide.)
Posted by cafe selavy at 9:36 AM