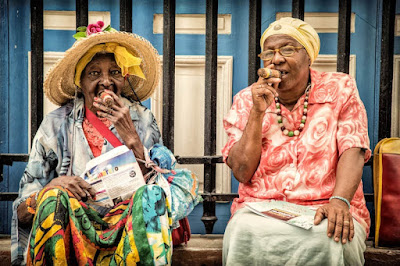 (the vote is in--and everyone likes the color versions better, so. . . )

When we got up on our first full day in Cuba, the sun was shining.  We'd slept long in the cool drone of the air conditioner.  But there was no hurry.  We showered and made Nescafe from the bottled water we boiled on the old gas stove that we needed to ignite with a lighter that kept burning my thumb as I dipped it to the gas, or so I thought.  When Ili came in, she said she smelled gas.  I had turned on the wrong burner.

"This isn't bad," I said, sipping the Nescafe and Coffee-Mate. "It really isn't bad at all."

We sat at the dining table in the front room and wrote in our journals until we could feel the day slipping away.

We went back to the Cafe California and there was our new friend Yassa.  We ordered our eggs and ham and good toasted Cuban bread and ate in relative silence.

"You two don't seem as lively as you were last night," Yassa observed.

"Too many run and cocas," I said.  And it seemed to be true.

I had told Yassa about my 1999 trip and asked him what would be the best way to get out to the Finca Vigia.  He laughed and corrected my pronunciation.

After breakfast, we walked toward the Hotel Nacionale where the cabbies stood in line.  We picked one of the cheaper ones out, but I regretted it right away.  We were breathing exhaust the whole way.  The cab was a wreck. But we were on our way, down the Malecon and then around the bend toward the cruise ships.  And then. . . we saw what we had been looking for the day before--Habana Viejo!  Somehow we had wandered in the wrong direction and had only been on the outskirts.

"Holy shit, look at that!  Remember the Dutch couple we asked directions from?"

We had seen a couple coming from the direction of old Havana and asked them the way.  Oh, they said, it is beautiful, don't miss it.  Later on we saw them again.

I told the cabbie that this is where he'd drop us off on the way back.

"We would have missed this," I said, "if we weren't headed out of town."  We both giggled at our stupidity.

The road out of town was lined with ancient buildings, factories, I guessed, that seemed to be functioning ruins.  We passed through the "suburbs" where the houses looked like they do in many Latin countries, flat and functionary with bold colors and corrugated tin roofs.  Hordes of people lined the streets.  I guessed they were waiting on the bus, but no, there were too many of them.  It was a mystery and more than a bit like a scene from some movies I had watched but couldn't remember.  Maybe, I thought, it was the carbon monoxide that was making things seem a little strange.

Then the road began to climb and the buildings began to thin.  We took a left hand turn and ascended through some gates to a guard house where we paid our pesos to enter the Finca.  It had changed.  Now it was a tourist destination with restaurants and music and stands for selling memorabilia.  The house, though, was much the same, though the furniture had been rearranged and maybe augmented, or so it seemed.  We looked through the windows with the other tourists which is all you were allowed to do.  People had been pilfering stuff, they said, so now. . . .  Ili didn't seem very interested in the things I pointed out, and I guess that was normal as Hemingway probably meant very little to her, either his life or his writings.  I doubted that many people read him any longer.  The "Hemingway Effect" was now invisible and shrinking, and the thought of that made me feel old.  We climbed the lookout tower where Hemingway would write each morning and looked back over the twenty or so miles back to Havana.  It was obvious why this was called Lookout Farm.

We wandered about the grounds a bit and sat on a patio under the Banyon trees watching the dogs and cats that roamed about the grounds, but Ili was restless and eager to head back to town, so we made our way back down the hill and found our cabbie.

On our way back, the roads were littered with uniformed school kids walking in groups.  It was Friday and freedom was in the air.

Some things are just universal.
Posted by cafe selavy at 9:16 AM