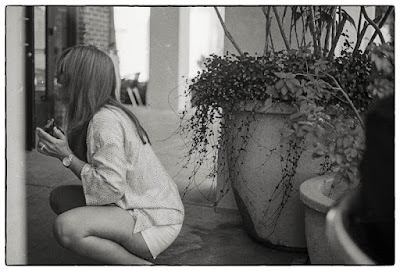 I just don't have any other pictures to post from my laptop.  I haven't been processing pictures this week.  Rather, I've had a rather slovenly staycation.  So sue me.  I've needed much sleep.  The world wears me out, and the future may not be all that rewarding.

Yesterday we took a trip to the coast.  What we didn't know was that it was the first day of Biker Week.  We took the back way off the interstate to get there.  That way takes us past a little place that is a well-known biker bar.  There are usually a few grits sitting outside in Harley Davidson tank tops and Z Z Top beards, but yesterday--Holy Shit and Mother of God--at least ten thousand bikers were there.  Ili was driving.

It was like being inside a cartoon.  No shit.  It was worse than Comi-Con or whatever it is called.  It was like going to a dog show where all the animals were retarded pit bulls dressed up in stupid costumes.

I know, I know.  You'll say that most of the people there are lawyers who can afford to buy new Harleys.

Thank you.  You've made my point.

There is nothing laudable about biker culture.  I've known bikers my entire life.  Not guys with bikes, but motorcycle gang fellows.  I can't name them or even the gangs.  They are dangerous people.  Again, I know, I know.  I hung out with them.  I have relatives who rode with them.  Ninety percent of the time, they aren't doing anything wrong.  Then they do, and it is really wrong.  Unless it is a bunch of sissy attorneys wearing "Hell's Pussies" on their leather vests, they are mafia-style criminals protecting their territory.  Ask Q about the Hell's Angels headquarters near his apartment in NYC.  There is something seriously wrong with them.  My relatives were fucked up.  My friends were REALLY fucked up.  I liked knowing them because I could get somebody stomped real good if I needed to.  But eventually they all went to prison or went on the lamb.  Sooner or later younger gang members take over and the old guys are like ousted silverbacks gorillas sitting on the outside of the circle, shoulders slumped thinking about the days when they got to mate with all the females.

Nope.  I could tell you stories here that would lead to federal investigations.  Just trust me on this one.

I'll tell one fun story because it is about an attorney.  He was a "friend" of mine in that we knew some of the same people, went to some of the same parties, and even ran with the bulls in Pamplona together.  He was a nice enough guy and had a sense of adventure about him, so one year during Bike Week, he wanted to go to the place I was talking about earlier to see the Cole Slaw Wrestling or some shit.  So he borrowed a friend's mid-sized Honda motorbike and put on a denim jacket and headed over.  When he got to the bar, he parked the bike but it tipped over and fell into another motorcycle.  He pulled it back up and got it on its stand and went inside to order a beer.  The fellow sitting next to him asked him if that was his little rice burner out there, and the attorney said yes.  The biker hit him in the mouth and knocked out two of his front teeth.

"Did you sue him, Jack?" I asked when he recounted the tale.

"I crawled out on my hands and knees, got on my bike and rode home."

He never got his beer.

Any of you who want to romanticize this shit. . . well, you deserve what you get.

Ili and I made it through without any trouble, but when we got to the beach, we went to a restaurant on the water to get some lunch.  The place was full of goofballs and I couldn't quit staring.  How in the fuck do they get so thick?  And the women. . . holy shit.  And all of them--ALL OF THEM--had that look on their faces, you know the one like everything confuses them and pisses them off, brows scrunched, foreheads wrinkled, looking around with wild eyes, tight lips, chin up, head moving in those quick, herky-jerky movements.

Today will be much less exciting.  I'm going to spread some Weed and Feed and maybe do some other home improvement duties.  Maybe.  I may just end up riding my little Vespa and wondering if I am going to be overtaken by a gang of mad dogs on REAL motorcycles.

In the end, that is the simple truth.  I'm just a Vespa rider in a world of Mad Dog Bikers.

Such, my friends, is my sorry fate.
Posted by cafe selavy at 9:25 AM