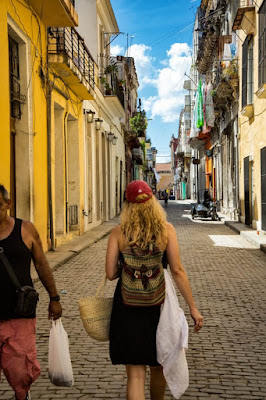 Here is what an American hippie looks like walking down a Havana side street after buying a handmade straw bag to take home as a gift for her mother.  The streets are for the most part bare.  Laundry hangs from the balconies of the apartments above.  Blue sky.  Clouds.  It is her last day in Havana.  If you look in the distance, you can see a vehicle parked on the side of the street. 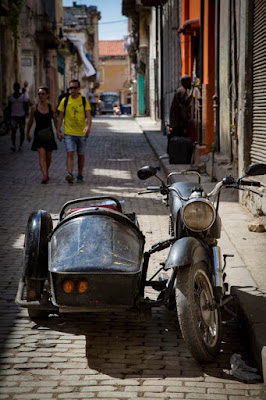 In just seconds, as the American blonde passes by the old motorcycle with sidecar, someone drops a chair from the balcony above.  It misses her by inches.  WTF?  Watch yourself.  This is Havana.

The loveliness of days without other-directed purpose, days where your interest determines which way you will turn, is a pleasure for some, a torture for others.  Inherent curiosity and an artist's imagination (I'm saying you don't even need the artist's talent) will propel you through the daily adventure.  Afterwards there will be a thousand and one tales.

Of course, it helps if you have the ability to tell them.

Ili, standing on the street outside a small store I have ducked into to buy two Coca Colas to go with our rum, is approached by a man who compliments her and kisses her on the cheek.  He then falls to the ground and begins doing pushups.  When I return, he is back on his feet, wiping his hands, grinning.  He smiles at me and says hello, offering me a hand to shake.  I look him in the eye and grin, our hands joined.

We turn and walk away.

"Maybe he was drunk, then."

"It might just be the way he greets pretty Americans.  Why not?"

Ili wanted to know why the people aren't allowed to leave Cuba, why they can't go where they want.  Americans take much for granted.  We have been the luckier than we have realized.  Most of us, anyway.  Once you know, you try to live more deeply, more profoundly.  And now. . . well, maybe we are about to find out.  It's not just the nut in the White House.  It seems everything has gone wrong.  It is like a sickness, a contagious disease without cure, a black plague of the head and heart.  I can't bear watching it.  I'll keep moving until I am no longer able.  I want to see what's left before it is just an Instagram moment buried deep behind the next most interesting thing.
Posted by cafe selavy at 8:26 AM