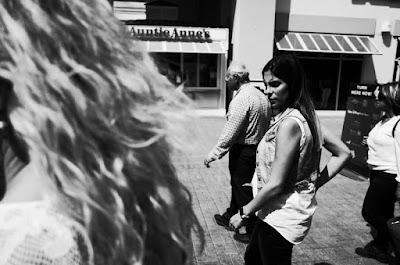 I've learned to love the little Fujifilm X100F so much.  It is prettier than the Leica.  Blasphemy, I know, but it is.  It seems to weigh half as much and is 3/4ths the size.  I can carry it in my hand with no need for a strap which makes it virtually disappear.  The image quality is less than the Leica, but I have the Leica when I need it.  As an everyday companion, though, the X100F is with me all the time.

And then I lost it.

Ili and I were getting ready for a Saturday afternoon.  She had the little Ricoh GRII (another camera I love and will speak of later), and I looked for the X100F.  It wasn't on the kitchen counter.  It wasn't on the dining room table.  I looked in my bag, and it wasn't there.

"Shit.  I think I left the camera in my Vespa seat overnight," I said.  And so I went out to look.

I had taken the camera on my Vespa ride the day before, and when I went into he grocery store, I took the little camera with me.  I got one of the shopping baskets and dropped the camera in while I shopped.  I got four cans of sardines and a pack of Perrier water.  That was it.

"I think I left my camera in the grocery basket yesterday when I went to the store," I said with panic and resignation.

"You wouldn't have left your camera.  What did you do with it when you unpacked the groceries?"

"I don't remember doing anything."

"Well, lets go to the store now.  Maybe it is in the lost and found."

I was already steeling myself for that disappointment.  I mean, I know me.  If I worked at a grocery store and had a chance to get a brand new camera just by not saying anything. . . .

"I've never even gotten back a pair of sunglasses I've left at a restaurant.  There is always some waiter wearing $200 sunglasses the next day.  Keeping the new camera is just one of the perks of working at the grocery store.  It is a gift from God.  It is just something you imagine you deserve."

Now here comes the best part of the story.  It has nothing to do with the camera, but if we hadn't gone to the store to get the camera back, we wouldn't have heard this.  So. . . we are standing in line waiting to speak with someone who can look in lost and found.  The line is fairly long with people buying lotto tickets or cigarettes or some such shit.  Anyway, behind us is the bakery fellow handing out free samples of their version of the Cinnabon.  He is a comical character, portly with glasses and a big if wimpy personality, something you might see on an early '60s sitcom--white shirt, bowtie, apron.  He just doesn't seem part of the contemporary world, and I've always gotten a kick out of him.  So he is hawking these cinnamon buns as people walk in the door.

I'm not paying much attention, though, because I'm miserable about the camera, but I hear him say, "Hi!  Want to try a cinnamon bun?  Come on over.  What's that you got around your neck, a telephone?"

Out of the corner of my eye, I see this really tall older lady with a lanyard looking thing, but I am still not paying much attention.  But I can feel something, a hesitation. . . something. . . and then I hear her say, "It's a heart monitor," in a weak and slightly embarrassed voice.  And just then, I'm thinking who in the fuck asks somebody if she is wearing a telephone around her neck?  Really?

And now, in spite of my psychic pain, I'm on the floor.  Holy shit, holy shit.  I look at Ili whose eyes are bugging.

Then we were at the front of the service line.

"I think I left a camera in the shopping cart yesterday.  Is this the right place for lost and found?"

It was, and the fellow took a key and walked away.  I knew he wouldn't bring it back, but I was hoping against hope for I already knew I'd be buying another one.  I liked the camera too much.  But Ili and I couldn't quit laughing about the cream cheese thing.  Ah, shit, whatever, I thought.  There is enough pain in the world to go around.

The fellow came back empty handed.

"O.K. Thanks for checking."

Then I remembered something else.  When I parked the scooter, I went into the garage to run the printer so the heads wouldn't dry up.  Could I have?  Maybe?

I couldn't remember the camera or a thing about it.  I was holding out this one last false hope, I thought.  Fuck it.

Ili and I went to Ikea.  It was her first time, and she was a bit overwhelmed.  The crowd was crazy on a Saturday afternoon.  It was like going to the United Nations.  Fun.  I'm always fascinated by the small apartments they have set up.  We looked at one that was 480 square feet that seemed marvelous.

"Let's buy a piece of property somewhere for vacations and build a tiny house.  Shit, we could definitely do this for weeks at a time."

Then we came to one that was 280 square feet.  It was cramped, of course, but it had everything.

"You realize that we could put two of these in the garage.  Maybe we should do that."

Then I came upon the find of the month--a rug.  It was just what I needed under the dining room table.  The cat had ruined the other one, and replacing it at Pottery Barn was like $350.  The rug in front of me was $80.

"There must be something wrong with it," I said.  "It's probably the wrong size."  I just can't believe in a good deal.  If it seems too good to be true, it is.  But Ili, always a believer, talked me into it.  And suddenly we were shopping.  We found everything we had ever wanted, everything we thought we would need.

But the best part was checking out.  Ili got a pack of cookies with raspberry filling, I think, and little windows cut in the dough in the shape of hearts.

Driving home, we ate them, and I was happy.  Fuck it.  We were still laughing about the heart monitor thing.

So when we got home, we opened the rug, moved the table, and rolled it out onto the floor.  And guess what?  It was perfect.  And so was all the rest of the booty we had scored.

"Listen, I'm going out to check the garage for the camera," I said with a frown.  I walked across the lawn and opened the door.

I walked back with the grin of victory.  Ili saw me coming through the kitchen window.

"Well, you were right, and so. . . you've won a free dinner!  I'm going to take you to the new ramen noodle restaurant which is all the hipster rage!"

But more about that later.  I'm just glad to have my little camera.  Man, I do love that thing.  And for anyone thinking about getting a Leica, I'd recommend you try one of these first.  I really, really do.
Posted by cafe selavy at 9:41 AM