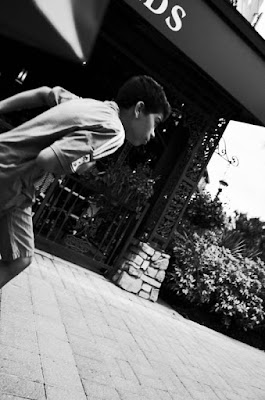 As I write this, I am eating a slice of one of those cinnamon buns that fellow was selling at the grocery store.  We went shopping yesterday, and Ili felt sorry for him.  She said he didn't seem himself, that he seemed glum.  He needed to make a sale, she said, so she bought two.

But I will eat carefully this week and go without alcohol.  My plan is to not drink more days than I drink this year.  This more than halves the amount of drinking I will do because I don't drink as much now when I do drink.  On Friday, alcohol just seems like a miracle gift, something to be savored rather than consumed.

Sure, by Sunday, it is something else, but then Monday rolls around.

We'll see how this works out.

Things don't go the way you think they will.  Not in any way.  You can plan on the future, but you can't count on it.  At least I can't.  Sometimes I let myself be lulled into a false sense of happiness and security, and I can see the great and wonderful future before me.

But that moment has yet to arrive.  Ever.  For me, I mean.  It seems different for others.  When I look at the lives of people I know, there are those whose future is just as they planned.  Or pretty much.  Got married, raised the kids, moved to better homes every decade or so.  Then one day there are grandkids and trips to Europe, etc.  It all seems to work out like an old Steve Martin movie.

And then there is my life which, if it were a Martin movie, would be more like "The Jerk."

I don't know.  Even thugs and rappers seem to end up with better lives than mine.  I think the difference is that I was a hippie.  Wrong decision.  What matters is money.  The more you have, the better things go.

That, maybe, is the lesson I should have learned.

The piece of cinnamon bun is gone, and it is time for another cup of coffee.  I have things to do before work, and so I will.

These posts are better, I think, when I have a story to tell.
Posted by cafe selavy at 8:17 AM