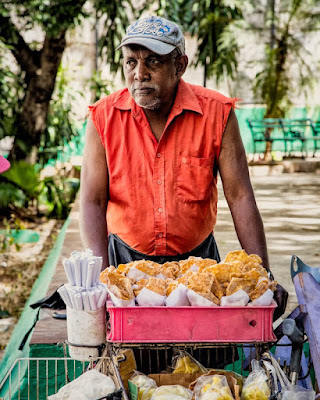 I wish I had this fellow's address.  I'd send him a copy of the picture.  It is the work of a true artist!

I took this in one of the many plazas in Old Havana.  Funny thing is, most of the people I saw buying food from him were Cuban.  I didn't buy any street food, and now I feel the fool for not knowing what is in the little white tubes.  I saw people eating them, but I didn't see what was in them.  There I was, the American tourist. . . .

Last night, Ili and I watched a movie about the Cuban Revolution, "Lost City," with Andy Garcia.  It was a fine movie, but they could not capture the splendor of Cuba in the 1950s by shooting along the modern day Malecon.  It would have been spectacular.  They should have colored the buildings in post-production, I think.

Bill Murray was in the movie.  He played a very strange character that seemed to be a non-sequitur.  Fine part, but odd.

The Revolution did not fare so well in "Lost City," emphasizing the old revolutionary phrase, "The end justifies the means."  Castro fucked up, of course, by never allowing free elections.

We have fucked up by allowing free elections.

Obviously, there is no winning.

Somehow,  I skipped supper last night.  Neither of us felt like cooking.  We made some guacamole and snacked on that.  But all I had to eat yesterday was brunch with mimosas.  Strange.  I still do not feel hungry.  Maybe I should be worried.

I'll fix more Cuba pictures today, perhaps.  Or I will clean the closet.  And/or my office.  I should not set too high an expectation.  It does no good to get ambitious.
Posted by cafe selavy at 9:39 AM